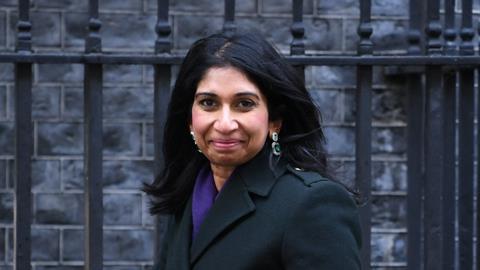 Politicians must take back control from unelected, unaccountable judges who are acting like political decision-makers, the new attorney general said a fortnight before she was appointed.

Downing Street confirmed this afternoon that Suella Braverman, who qualified as an attorney in New York State, would be replacing Geoffrey Cox as the government's most senior law officer.

Braverman's appointment will stoke fears that the government may try to curtail judicial independence after she wrote a piece last month calling for politicians to take back control from the judges.

In a piece published on the Conservative Home website, the former Brexit minister said: 'Restoring sovereignty to parliament after Brexit is one of the greatest prizes that awaits us. But not just from the EU. As we start this new chapter of our democratic story, our parliament must retrieve power ceded to another place - the courts. For too long, the Diceyan notion of parliamentary supremacy has come under threat. The political has been captured by the legal. Decisions of an executive, legislative and democratic nature have been assumed by our courts. Prorogation and the triggering of Article 50 were merely the latest examples of a chronic and steady encroachment by the judges.'

Braverman said repatriated powers from the EU 'will mean precious little if our courts continue to act as political decision-maker, pronouncing on what the law ought to be and supplanting parliament...

'Traditionally, parliament made the law and judges applied it. But today, our courts exercise a form of political power. Questions that fell hitherto exclusively within the prerogative of elected ministers have yielded to judicial activism: foreign policy, conduct of our armed forces abroad, application of international treaties and, of course, the decision to prorogue parliament. Judicial review has exploded since the 1960s so that even the most intricate relations between the state and individual can be questioned by judges.'

On the Human Rights Act, Braverman said 'strained interpretations of the Article 8 right to private and family life have meant that inherently political decisions to do with immigration and extradition have been overturned by the courts'.

She insisted that she was not lambasting the judiciary or human rights but said the delicate relationship between law and politics is off-balance.

'Yes, courts should operate to curb abuse of power by government but if a small number of unelected, unaccountable judges continue to determine wider public policy, putting them at odds with elected decision-makers, our democracy cannot be said to be representative,' she said.

Braverman read law at Queens' College, Cambridge University. She did a masters in European and French Law at the Pantheon-Sorbonne in Paris. She sat the New York Bar exams and qualified as an attorney in New York State. She trained as a barrister in London and worked at the bar for 10 years, specialising in planning law and judicial review.