A social enterprise set up by a legal aid barrister is aiming to slash the cost of court transcripts by harnessing voice recognition software. Sophie Walker, of One Pump Court, says that technology can help make the workings of the justice system understandable to a far wider audience.

However, her business, Just-transcription.com, will first have to win a place on HM Courts & Tribunals Service’s panel of approved suppliers. 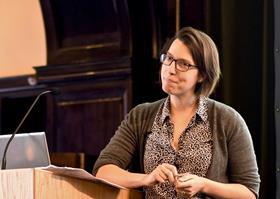 Currently, court transcripts from commercial suppliers cost between £100 and £120 per audio hour. Walker says that automating the process can halve the cost if the transcript is corrected by a human editor, or cut it by nine-tenths for a raw version. ‘There are lots of hearings where you just want a reminder of what happened rather than every single exact word,’ she said.

Meanwhile, in another ‘justice tech’ initiative, the Incorporated Council of Law Reporting has opened a research initiative to find new ways of tapping an ‘ocean of insight’ in the corpus of law reports to make it available to a wider public. The not-for-profit body, set up in 1865 to publish authorised reports of judgments, said its ‘ICLR lab’ will make case law data available in a ‘safe space’ to collaborative projects looking at ways of extracting knowledge from its reports.

The aim is ‘to provide a focal point for advanced development that stands to benefit ordinary people wherever they seek legal advice’, Daniel Hoadley, the ICLR’s head of research, said.

Hoadley said ‘law tech’ innovation in the UK had fallen behind that in the US, Canada and Australia because data is locked up in historic case reports only understandable by experts. ‘Legal innovation in the UK is in a weird place,’ he said. ‘On the one hand, the big firms are furiously investing in technology to gain an edge over their competitors. On the other hand, the basic components of a modern legal system that works for all, such as comprehensive open access to case law, are conspicuous by their absence.’