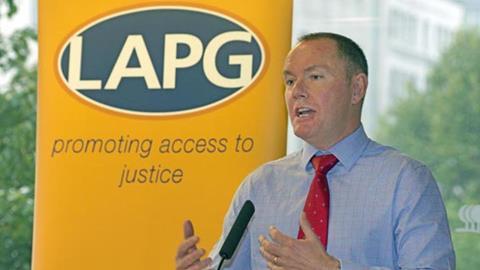 The Legal Aid Agency wants an ‘adult-to-adult’ relationship with solicitors as it plans further cuts. But how does that square with a new ‘embarrassment’ clause in contracts?

Legal aid solicitors continue to be buffeted by political turbulence. Martha Spurrier, director of Liberty, suggested their gathering at the Legal Aid Practitioners Group conference in Leeds had prompted a ‘pre-emptive strike’ from Theresa May. The prime minister hit out at ‘activist human rights lawyers’ in her party conference speech 48 hours earlier.

Spurrier is not intimidated, telling the event: ‘We are watching Theresa May, and we are watching Amber Rudd, and Liz Truss, and Michael Fallon, and politicians across the political spectrum. We will not be cowed – not by your cuts, or by your spin or by your cumbersome computer systems.’

On the latter, four letters will have immediately sprung to mind: CCMS. One only has to type ‘CCMS fail’ into Twitter to understand the level of frustration practitioners feel in dealing with the Legal Aid Agency.

Agency chief executive Shaun McNally stressed he is fully aware of these frustrations – and indeed a customer service team was on hand at the event and ready to listen.

McNally was in a better place reminiscing about happier times, when the agency and practitioners worked well together, such as on the agency’s ‘crime change’ programme.

He recalled: ‘If we reflect back, 500,000 applications on paper every year, submitted across 123 court locations. Working with you we were able to bring those into the agency, put it on to a digital platform and transform the way in which that service was provided… It was possible as a result of us working together for the right outcomes.’

A civil servant talking about the ‘good old days’ can mean bad news is to follow. And so it turned out. The agency has slashed administrative spending from £112m to £78m since 2010, but McNally has to find another £11m of savings by 2020.

There was no indication of where precisely the axe will fall. McNally told solicitors only that they need to imagine a ‘slightly different’ future.

He added: ‘What if we were able to work together, and with the Legal Aid Practitioners Group, to help identify some of those things that frustrate us and frustrate you? What if we look for better outcomes in the service that we provide? What if we challenge ourselves to work in a different way? What if we had a different relationship, that was akin to adult to adult?

‘What if we understood and appreciated each other’s perspective and recognise that there will be differences – but we were prepared to move to make a real difference? I believe we can do things differently, and I’m committed to working with you, to listening to you, to make our processes more efficient and more effective as we move forward.’

But perhaps McNally should be addressing these questions to his own agency, as one solicitor intimated: ‘I’m quite happy to have an adult relationship with the LAA so I’ll say, quite bluntly, it is not performing as well as it did a few years ago. Answering the phone in 30 minutes would be fantastic. Now you just don’t answer it at all.’

It is not lost on practitioners either that had the agency listened to their concerns about the now-scrapped controversial two-tier crime contracts, it could have avoided forking out £955,000 to reimburse legal costs incurred by bidders challenging the tender.

And exactly how is it possible to have an adult-to-adult relationship when the agency insists on inserting an ‘embarrassment’ clause into the standard terms of its new crime contracts? Later in the day it emerged that Public Law Project, on behalf of its clients, the London Criminal Courts Solicitors’ Association and national firm Tuckers Solicitors, has sent a pre-action protocol letter outlining ‘serious concerns’.

As the Gazette reported in July, solicitors could be sanctioned for bringing the agency into disrepute. PLP says the clause may be incorporated into civil contracts too. Its letter identifies a range of scenarios caught by the clause.

Cris McCurley, a partner at Ben Hoare Bell in Newcastle, told the conference: ‘I’m really worried about the embarrassment clause. [If it] stands, anything we may do to challenge the LAA or Ministry of Justice could lose us our contracts.

‘If it does stand, I would love it if all of us just got behind each other and agreed we would support each other if any of us were challenged, or that [if] any of us look like we’re going to lose our contract – we all stand up and say “this isn’t happening”.’

The Gazette understands the clause originated from ministers reading reports of individual solicitors’ allegedly ‘scandalous’ behaviour – and asking whether it would be possible to revoke their contract.

However, its inclusion has raised questions about whether there is a more sinister motive. Could practitioners protesting in the public interest about something which it is perfectly legitimate for them to raise – such as the issue of ‘ghost’ duty solicitors – be cited for a contractual breach?

Discussing what the agency means by ‘embarrassment’, one solicitor questioned whether the clause covers the behaviour of everyone in a firm.

A spokesperson for the agency told the Gazette only that: ‘This contract will ensure that legal aid providers do not do anything that will damage the trust that the public places in legal aid.’