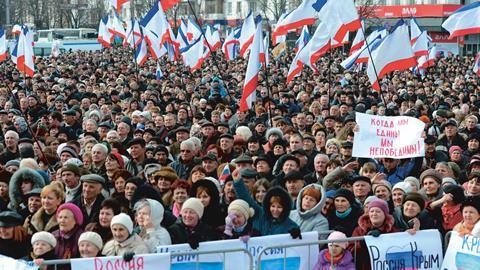 Prosecuting cross-border fraud, UK exceptionalism and the rule of law in Ukraine were among the issues discussed at last month’s plenary session of the CCBE.

The UK will become a ‘sanctuary’ for Europe’s most serious criminals following its ‘utterly pointless and hugely expensive’ opt-out from 135 European crime and justice measures, a delegate told the Gazette at the plenary session of the Council of Bars and Law Societies of Europe (CCBE).

Other delegates were equally outspoken, with one delegate dismissing the proposed European Public Prosecutor’s Office (EPPO) as a ‘sledgehammer to crack a nut’, while the head of the Portuguese delegation said recent legal reforms were an ‘assault’ on his country’s ‘democratic foundations’.

The rule of law is threatened in Ukraine, the Gazette also learned, with lawyers suffering ‘physical violence and unlawful detention’. The administration of justice in Hungary continues to be in flux, as the government announces a new justice minister and an eastward-looking prime minister is elected for a second four-year term. There are also moves afoot to make life easier for UK and other practitioners in Europe’s top court, a member of the UK delegation disclosed.

Red meat to the Eurosceptics

CCBE criminal law committee member Helen Malcolm QC spoke of Theresa May’s July 2013 announcement that the UK is to opt out of 135 European crime and justice measures pre-dating the 2007 Lisbon Treaty, but is then to opt back into 30 of them. The UK is to withdraw from the measures, many of which are already obsolete, on 1 December 2014.

‘This is just the government throwing red meat to the Eurosceptics,’ said Malcolm. ‘There is no legal gain, only political gain, so that the government can be seen to repatriate our laws. But it’s utterly pointless and (will be) hugely expensive if we have to renegotiate 30 measures. We are going to drop off the edge on 1 December, but are nowhere near even first base with negotiations. We are still negotiating whether we have time to negotiate.’

Malcolm stressed that the UK has one of the best legal systems in Europe and should be encouraging the other member states to ‘live up’ to its standards. ‘We should be patting ourselves on the back rather than picking up our toys and walking off in a sulk,’ she said. ‘Yes, there are some problems with pan-European laws, in particular the European Arrest Warrant (EAW), but the best way to correct them is by being part of the inner circle. The EAW has definite benefits – one document for all 28 member states – and we should build on those.’

She warned that, although the UK ‘punches above its weight’, the patience of other member states is ‘wearing thin’. She added: ‘All states have much the same attitude to crime – none of us disputes that murder, robbery, fraud are crimes, for example – so why opt out of what is likely to take months, if not years, to renegotiate? Europe’s major criminals are not stupid. They know that the UK is going to be a sanctuary after 1 December. Do we really want gang bosses living in our country?’

Still on criminal matters, Irish solicitor and CCBE criminal law committee chair James MacGuill raised concerns about the proposed EPPO. This is to be the body responsible for investigating and prosecuting EU fraud and other crimes damaging the EU’s financial interests. Currently, only national authorities can do so and their competences stop at their countries’ borders. The new EPPO will combine European and national law enforcement efforts to present a united front against fraud.

MacGuill said: ‘My principal concern is that EPPO is a sledgehammer to crack a nut. Even the most trivial crimes could be dealt with by EPPO, which will clog the courts and cost too much money.

‘Second, although the substantive and procedural rules for EPPO are to be standard across Europe, they will still defer to national laws. There will therefore be a very real danger of forum shopping, because the prosecution will naturally choose the jurisdiction most suitable for its purposes.’

What did MacGuill recommend? ‘Perhaps the Court of Justice of the European Union (CJEU) could devise good standard guidelines to be applied wherever the trial is held. As things stand, you could get a different result in, say, Berlin or Paris.’

The UK and, indeed, Ireland are opting out of EPPO. Is EPPO ever going to see the light of day? ‘It is still under negotiation,’ said MacGuill, ‘but it is definitely going to happen. The level of support for it has increased beyond the nine states required for enhanced co-operation [which allows states to work together without the unanimous agreement of all member states, provided there are at least nine states involved and no damage is done to the framework of the EU].

‘It is possible that it will get unanimous support from all member states less the UK and Ireland, who are ignoring the realities of what goes on in the EU. London clients, for instance, could easily fall foul of forum shopping and have no resort to their own national representation on EPPO.’

Troika pulls out – at last

Portugal and Ireland are bidding dry-eyed farewells to the Troika – the International Monetary Fund, European Commission and European Central Bank – which has been demanding legal reforms as part of the price of lending them money to survive the economic crisis.

Portugal delegation head José de Freitas told the Gazette that, after three years in the country, the Troika-imposed procedural reforms have not succeeded in speeding up cases through the courts. ‘There has been no real decrease in the backlog,’ he said. ‘Any reduction in cases pending is not the result of more efficient working, but the result of cases being closed because a shorter limitation on how long a case can be live has come into effect.

‘One lasting effect of the Troika is reduced access to justice. From September this year, we will be closing around 50 courts in the interior, poorer part of the country. At the same time, court fees have increased substantially. These two reforms will stop many people from being able to seek justice and are, in effect, a double assault on the democratic foundations of this country.’

De Freitas is also pessimistic about the likely effects of a law published in January 2013 allowing law firms based on the alternative business structure model, where a practice is owned by non-lawyers, to be established in Portugal. ‘ABS will reduce the independence and autonomy of lawyers,’ he said. ‘There will be a conflict between commercial and ethical obligations. The legal profession will become less important and the fundamental values of liberty and democracy will be weakened as a result.’

Former head of the Irish delegation MacGuill reflected that his country will be indebted for a long time after the memory of the Troika fades. One lasting impact, he believes, is that ‘cynical people have noted an increased number of crises’ since its departure.

‘It is as though the government has reverted to its slipshod ways now that the discipline imposed by the Troika has gone. We have had stories that the police bug conversations between lawyers and their clients. And whistle-blowers have reported financial irregularities in hospitals and charities.

‘The government’s failure to deal with these issues has undermined its authority and led to the resignation of justice minister, Alan Shatter. He is to be replaced by 64-year-old Frances Fitzgerald who, given her seniority, is expected to want to make an impact quickly. So yet more turbulent times for Irish lawyers lie in wait.’

Rupert D’Cruz, co-chair of the CCBE committee that deals with eastern and central Europe, tells the Gazette that active steps are already being taken in Crimea to absorb its legal system into Russia’s. The Russian Federal Chamber of Advocates, which is similar to the UK’s Bar Council and is the only regulator of Russia’s legal profession, is organising examinations for local lawyers so that they can convert to becoming qualified Russian lawyers.

‘There is no evidence of forward planning,’ British barrister D’Cruz stressed. ‘It is just a quick reaction to November 2013, when the Maidan [Kiev] protest started. Nonetheless, it poses serious legal issues. If you want to appeal a case that happened in Crimea, who do you appeal to – Russia or Ukraine?’

Donetsk and eastern Ukraine have experienced a ‘very worrying breakdown in law and order’, said D’Cruz, with lawyers suffering harassment, physical violence, unlawful detention, and their offices and homes searched.

‘Lawyers in western Ukraine,’ he added, ‘are best able to function at the moment, but are operating under difficult economic conditions. The collapse in the rule of law means fewer deals and transactions, and reduced foreign investment. The entire court system is dependent on strong government – on an effective bailiff service, trained court officials and the rest. If that fails, then there will be even more severe financial and economic damage.’

At last, good news – from Hungary’s legal profession. Following domestic and international criticisms of reforms pushed through by prime minister Viktor Orban and his Fidesz party, there is growing evidence that anti-European and non-democratic policies are being moderated to foster cross-border co-operation.

Former CCBE president Peter Koves said: ‘The justice minister has been replaced with someone who is not a party apparatchik, but is a lawyer who has published criticisms of Orban’s interference with the constitution. There are also serious attempts being made to improve judicial training and IT in the administration of the courts.’

Another Hungarian delegate, Laszlo Reti, commented: ‘The government has also passed a new law in accordance with a European directive on national data protection. Documents will be more trustworthy  and reliable, which is good for the rule of law and for clients.’

Jewel in the crown

A conference attended by more than 200 practising lawyers, representatives from EU institutions, and national and member state judges has for the first time created a de facto extended expert users’ committee for Europe’s top court, the CJEU.

This court, which Hugh Mercer QC, chair of the CCBE’s permanent delegation to the CJEU since 2010, called the ‘jewel in the crown’ of Europe’s court system, can be pleaded before by any one of Europe’s million-plus lawyers. Mercer explained: ‘All EU citizens are free to select the lawyer of their choice to act for them in the CJEU. Accordingly, the CCBE has now published guidance for such lawyers to help them present their client’s case to the best of their ability.’

Mercer also hopes that the success of the 28 April conference in Brussels, EU Courts – Looking Forward, could lead to the creation of a permanent sitting group of experts to make concrete proposals to improve the workings of the court.