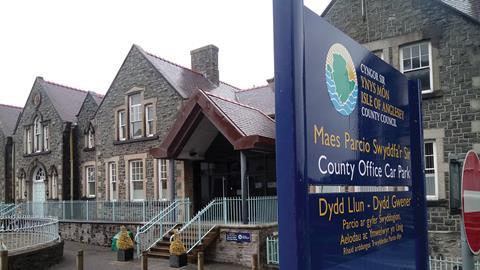 As towns across the country are denuded of courtroom provision, pop-up courts using video technology are filling the vacuum. The Gazette goes behind the scenes at one such court in Wales.

A frail, visibly shaking, grandmother enters the room and is ushered towards a desk positioned in front of a large television screen. Once she sits, she can see more clearly three individuals sitting in an office almost 200 miles away. They are watching her. It is here she will try to persuade the panel that she should be eligible for disability benefits.

It is a desperate, wretched situation, and one which she faces alone. A widow who barely leaves the house and did not even tell her daughter she was coming here, she talks for 30 minutes with the panel and is told she will be informed of its decision by post.

The impersonal nature of this video hearing and the remoteness of the judges will be of concern to anyone with a sense of justice and fairness. But the alternative, for a woman unable to walk unaided, is a 30-mile trip to her nearest court. This scenario, for all its faults, is the best she can hope for.

The setting is a council-owned building in the market town of Llangefni, on the island of Anglesey at the north-west tip of Wales. The town has been stripped of its court, as has the rest of the isle, in the past decade. Lawyers and their clients are now forced to travel to Caernarfon, symbolically across the water, for hearings.

At the time of the most recent closures, Lord Thomas of Cwmgiedd, then lord chief justice, insisted that alternative provision be found to accommodate this isolated community. The solution was to rent this building every Friday for criminal, family and social security appeal hearings. The television is wheeled out as needed. Security is as tight as any court, rooms are available for private conversations and there is the required ‘escape route’ out the back.

Court officials stress to me this is not designed as a replacement for court provision. Vacated buildings were expensive to maintain and used infrequently. Instead, this alternative provision is by its nature ad hoc and agile. For court users, something is better than nothing.

Apart from the trauma of the hearing itself, on my visit the technology works perfectly well. Occasional background noise picked up in Cardiff is automatically drowned out after a second or two, and each welfare appellant is put at ease by the judges. They seem to recognise this is a difficult situation and allowances are made. No one is rushed, and users are given the opportunity to take a break when required. If anything, it seems from watching these hearings that the lack of any legal representation is a far greater challenge than appearing on screen.

Across the country, alternative provision is being looked at as an option for communities where courts have closed. Town halls as far apart as Kendal and Tunbridge Wells are hosting court proceedings, while council offices in Chichester are being adapted to ensure local provision remains in the West Sussex city.

Practitioners remain sceptical, if not hostile. One solicitor in Holyhead, where the defunct magistrates’ court is rumoured to be a future Wetherspoons pub, tells me he has grave misgivings. ‘I find these hearings intimidating for court users and there is no chance to gauge body language. Court users accept it because it’s just another element of their lives they have to sort out. To make these hearings work needs a lot of preparation and in particular most people need to be represented.’

A spokesperson for Anglesey Citizens Advice says its experience of video conferencing for welfare benefit tribunals is poor. ‘The video connection has not been available on the day, which has meant that the clients have been offered a telephone conference-style tribunal which has been less than successful,’ she says. ‘We have asked for all the decisions made so far to be set aside on grounds of procedural irregularity, which has been allowed.’

Penelope Gibbs, director of campaign group Transform Justice, backs the idea of ‘pop-up’ courts but tells me this hybrid model of litigants speaking to judges through video raises serious questions about access to justice.

The arguments against are strong, but ultimately the choice comes back to whether people want to travel long distances or see justice done in their home town – albeit through remote judges. More court closures are inevitable and this is a potential pill to mitigate their impact.

The second woman appearing by video in Llangefni is another individual pleading for her disability benefit. Her case is so overwhelming the judges agree on the spot. For all she may have balked at justice through a screen, at least she can walk – slowly – home.