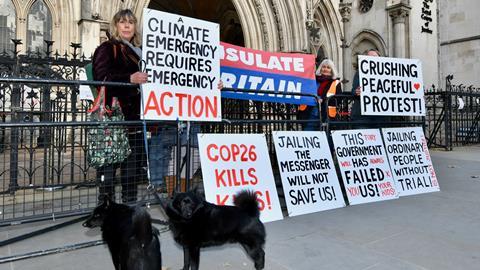 Nine Insulate Britain activists have today been jailed for contempt of court for breaching an injunction preventing protestors from blocking the M25.

The group began blocking roads in London, Birmingham, Manchester and Dover in September as part of its campaign to get the government to insulate homes.

Nine activists, aged between 21 and 58 years old, admitted contempt of court by breaching a High Court injunction which banned protesters from ‘blocking, endangering, slowing down, obstructing or otherwise preventing the free flow of traffic’ on the M25.

One member of the group, 27-year-old Ben Taylor, told the High Court this week that, if he was not jailed, he would ‘go and block the motorway at the earliest opportunity and will continue to do so until the government makes a meaningful statement and acts on it’.

Dame Victoria Sharp said his ‘inflammatory’ submissions were a ‘call to arms’, and jailed him for six months to deter him from ‘committing further breaches’.

The nine were led away through the dock of Court 4 of the Royal Courts of Justice in London as supporters chanted ‘we are unstoppable, another world is possible’. Smart announced her intention to go on hunger strike.

In the court’s ruling, Sharp said: ‘The defendants, or some of them, seem to want to be martyrs for their cause and the media campaign surrounding this hearing appears designed to suggest this.’

She added: ‘By deliberately defying the M25 [injunction], these defendants broke the social contract under which in a democratic society the public can properly be expected to tolerate peaceful protest.’

A suspended sentence was inappropriate as ‘none of the defendants has demonstrated any contrition or understanding of the seriousness of deliberately breaching a court order’, Sharp said.

Raj Chada from Hodge Jones & Allen, who represented some of the defendants, told the Gazette that it was ‘disappointing that peaceful protesters are imprisoned’.

‘I think there is a concern at the minute about how the courts are treating peaceful protesters,’ he added. ‘The focus needs to be on tolerating civil disobedience and going back to the issue of the climate crisis.’

Pictured above: Insulate Britain protesters outside the Royal Courts of Justice