Obituary: Julian Young - a solicitor always willing to step up to the mark 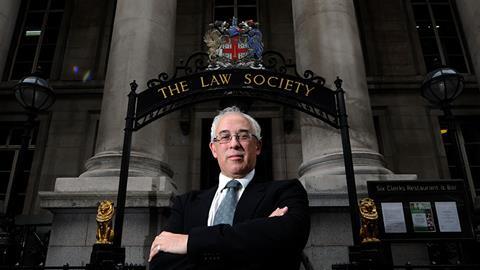 All of us at West London Law Society, the Association of Military Court Advocates, Tuckers Solicitors, where he was the father of the firm and especially Judy Ramjeet, his partner, are deeply saddened by Julian’s passing.

Many of his colleagues and friends had been in almost daily contact with him over the past few weeks and months. One had spoken to him on the Friday evening, as Julian was about to listen on the radio to a football match - we suspect that this may have involved his beloved Arsenal.

On the Saturday he was informed that the client he had been representing for the last five months on a very serious RUI'd case had called to thank him for his efforts in securing, that morning, an NFA and wished him a speedy recovery, but sadly Julian passed away at home in bed in the early hours of Sunday 15 August.

Julian was the current president of West London Law Society and had been well enough to chair their last committee meeting on 20 July, and then join them for dinner at his favourite hostelry.

We were all honoured to have known him as a good friend, colleague, adviser and expert advocate and lawyer.

He had fought his leukaemia diagnosis with selfless determination, and never complained. Julian was a special person, and kindness personified.

Julian was also active in the field of military law and a keen supporter of an independent service justice system, although typically he was always quick to point out its weaknesses and any unfairness to his clients. He appeared regularly in the court martial during his career, including in a high-profile gross negligence manslaughter case arising out of operations in Afghanistan, which raised the issue of combat immunity only then recently reclarified by the Supreme Court. He was always passionate that those who served the Crown should be represented whenever they were before the courts.

As a keen supporter of the Service Justice System, Julian was a member of the Association of Military Court Advocates from its earliest days and served as a member of its committee from 2012. Determined to master the field he paid great attention to the minutiae of military life to ensure he fully understood every aspect of his client’s case. Julian was always keen to promote excellence in the field and to see effort rewarded. He was delighted when a former client, who had provided a well-received talk to military lawyers on the ‘view from the dock’, received a letter of commendation from the chief of the General Staff as a result. Always willing to share his knowledge of the field Julian would not only lecture on the subject but was writing a practitioner’s guide to the court martial before he fell ill.

Julian Young graduated in 1974 with an LLB (Hons) from the University of London and was admitted as a solicitor in 1977. To further his qualifications he studied towards an MBA and graduated in 1986. He held higher rights of audience in criminal cases since January 1999.

Julian had extensive experience in criminal cases at all levels; in private practice and as a full time prosecutor for the Post Office 1981-1987. In addition to this, he was also a part-time lecturer to the Metropolitan Police at Hendon.

He specialised in preparing, advising upon and appearing as an advocate in court martial cases involving personnel of all three armed services, Army Board hearings, complex civilian criminal cases, and advising and advocacy in connection with appeals against both conviction and sentence. He also had extensive experience in advocacy in parole hearings and disciplinary prison adjudications.

Most recently, in April 2017, he appeared as leading advocate, with Judy Ramjeet, his partner and a solicitor-advocate with Tuckers as junior advocate, in a trial of manslaughter by gross negligence which concluded with a conviction of an RE sapper for negligent discharge of duty.

Julian’s experience covered extensive advocacy experience in all criminal courts, magistrates’, Crown and Court of Appeal [Criminal Division]. He appeared as the advocate R v Hodgson [2009] EWCA Crim 490 for the appellant whose conviction for murder was quashed after 27 years based upon DNA evidence, when he was commended by the lord chief justice. Reference to this case and his role was approved by the Supreme Court in R (on the application of Nunn) (Appellant) v Chief Constable of Suffolk Constabulary and another (Respondents) [2014] UKSC 37.

Julian’s work was not one-dimensional however, with his experience including civilian and military police station work as a duty solicitor, magistrates’ and youth court attendances as a duty solicitor, preparation of cases, supervision of staff, selection of counsel and experts as appropriate and preparing training programmes, he was a valuable asset.

He was nominated and shortlisted as 2010 Legal Aid Lawyer of the Year.

His books on Court Martial Practice and also on Crisis and Reputational Management are due to be published this year. In his not very spare time, Julian also wrote two novels which are in the process of being published.

A long-standing committee member, and proud of his achievements at West London Law Society, Julian was always willing to step up to the mark and was president in 1997, 2004, 2007 and, being the present incumbent, 2018 – 2021. His was a proud record of standing up for clients and the profession as a whole, especially the publicly funded part of the profession which is under such pressure today.

Julian worried about the future and felt it difficult to advise any prospective solicitor to enter the profession in a legal aid practice – but if that was the dream of a law student, he believed a local law society should encourage the next generation of solicitors – provided that they went into the profession with eyes wide open. Julian was pleased to educate, inspire and support students, not least at the University of Hertfordshire where in conjunction with long-standing committee member and mentee Dr Klearchos Kyriakides, he would give public lectures, arrange visits and invite students to observe his advocacy and the courts in action, and organised a mock trial for students and staff to participate in.

Julian was a relentless supporter of Save UK Justice. He also liked a joke and was fond of parodying Ministry of Justice ministers and civil servants. He particularly enjoyed quoting Yes Minister’s Sir Humphrey Appleby: ‘You can’t put the nation’s interest at risk just because of some silly sentimentality about justice.’

Julian was never intimidated, and always happy to engage in debate. In 1971 his late cousin, Bernard Kissen who was a council member, invited him to a Solicitor’s Journal event. He arrived, dressed in his only suit and knowing no one except his host. He ended up in a corner with an elderly man and they discussed the future of the legal professions. Julian told the gentleman that he thought that, in his lifetime but not in his professional lifetime, Julian would see solicitors with the same rights of audience as barristers. His cousin walked over, bowed formally and said, ‘Master, may I formally introduce Mr Julian Young.’ With horror Julian realised that he had been speaking to then Master of the Rolls, the great Lord Denning, who replied ‘Don’t worry Mr Kissen, Mr Young and I have been having a fascinating conversation about the future of the legal professions” before continuing his conversation with Julian.’

Julian was both right and wrong; it was with in his lifetime and his professional lifetime that higher rights of audience came into being, in his case with criminal rights which he has exercised since 1999. Coming into contact with the courts for the first time as an 18-year-old observer at Bow Street Magistrates Court , he did not imagine that he would ever appear there, let alone at the Crown Court, or indeed in the most serious Court Martials and at the Court of Appeal.

On his first day as president for the fourth time Julian believed that history had been made – this was the day after we had a first solicitor lord chancellor! His hope was sincere that the new lord chancellor would mean a change of attitude and the 'Sir Humphreys' would no longer prevail. On behalf of the West London Law Society Julian engaged in correspondence with presidents of the Law Society and pushed for them to make strong representations to the Independent Review into Criminal Legal Aid.

At West London pre-Covid Julian organised a series of successful social events in which he interviewed guests as diverse as former MP and criminal barrister Jerry Hayes, and his good friend, comedian, and fellow Arsenal supporter Milton Jones. These were a great success. Julian loved being in the chair and was hoping to do more.

His attitude to his illness was one of utmost bravery and although he was ill he thought of others, checking on the health of good friends and colleagues. A prolific contributor and tweeter it was typical of Julian that he was still tweeting the night before his passing.

Alternatively, you can join via Zoom: