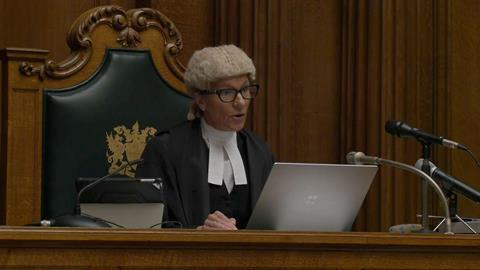 An Old Bailey sentencing has been broadcast for the first time on TV two years after the law was changed to allow cameras into the Crown courts of England and Wales.

The BBC and Sky News showed Her Honour Judge Sarah Munro QC (pictured above) deliver sentencing remarks this morning in the case of Ben Oliver, 25, who pleaded guilty to the manslaughter of his grandfather in south London.

'This is a complex sentencing exercise,' TV viewers heard Munro state as she carefully set out how she reached the decision of life imprisonment with a minimum term of 10 years and eight months. Time spent in remand would be deducted, resulting in a term of nine years and 63 days, the judge told Oliver. 'Once you have served that term, you will be entitled to apply for parole. However, you will not be released by the Parole Board unless they conclude you no longer pose a risk to the public. If you are released, you will remain on licence for the rest of your life,' she said.

Under the Crown Court (Recording and Broadcasting) Order 2020, broadcasters may film High Court and senior circuit judges sitting in the Crown court. Broadcasters must still apply to film the sentencing remarks and the judge will decide whether to grant the request. To protect the privacy of victims, witnesses and jurors, only the judge must be visible in the broadcast.

Some Court of Appeal and Supreme Court cases are already live-streamed. The lord chief justice hailed the latest development as a ‘very positive’ step in promoting open justice.

‘It’s something that I was really keen should happen and I started working on it when I became lord chief justice in 2017,’ Lord Burnett of Maldon added. ‘The law was introduced in 2020. And we all hoped that we would start filming sentencing remarks in high-profile criminal cases in the summer of 2020 and were it not for Covid, that would have happened, but now it is happening. I think it’s an exciting development, because it will help the public to understand how and why criminals get the sentences that they do in these very high-profile cases.’