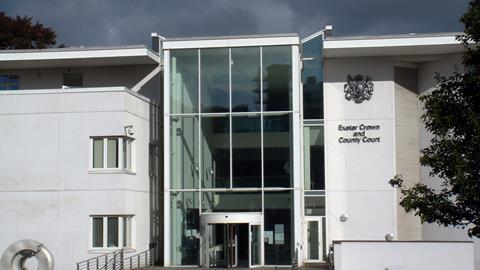 A solicitor has been jailed for four years for stealing almost half a million pounds from his clients.

Simon Armitage, 65, was a conveyancing and probate solicitor with his own business when he started to divert and steal money from clients to pay a tax bill.

He managed to hide what he was doing for four years until after he sold his business to Torquay-based law firm Kitsons.

Kitsons, which had no knowledge of his criminal activity, was left to foot the bill.

After Armitage was jailed, Kitsons said in a statement to the Torquay Herald that all of his clients had been paid back.

Judge Francis Gilbert said: ‘In addition to losses you caused to clients, you caused very considerable losses and expense to Kitsons, a reputable firm whose reputation has been tarnished by what you had done.’

He added: ‘These are serious offences involving significant sums of money and your duty to clients.’

Armitage admitted nine counts of fraud and one of forgery between 2009 and 2013 when he appeared for sentence at Exeter Crown Court (pictured).

Judge Gilbert said the reputation of Armitage was now in tatters. He added: ‘You have admitted misappropriating the funds of 10 separate clients of your practice as a solicitor working mainly in probate and property.

The court was told Armitage & Co had operated as a sole practitioner from offices above Lloyds bank in Exeter for a number of years.

In June 2013 his company was dissolved and merged with Kitsons, where he became a salaried partner.

The court was told the offences came to light after another senior solicitor at Kitsons asked Armitage about a case he was dealing with why it was taking some time.

Armitage told his colleague, to his ‘utter surprise’, that he had stolen the money from his client.

He said that he planned to pay it back through the sale of his house. Investigations then revealed the extent of the deception.

Stephen Nunn, mitigating, said Armitage felt shame and regret for what he had done. He said: ‘He deceived his clients and then he deceived his employers.

‘Kitsons are the real victims. They are the ones who will have to pay. It started after many years of good reputable practice. He got into difficulties with tax bills.

‘He started to divert funds initially thinking that his financial equity would cover it but he was not able to sell his house.’ He said the fraud grew bigger and bigger and ‘escalated in a way he lost control of’.

The court was told Armitage did not spend the money on a lavish lifestyle.

Nunn said: ‘He is fully aware of the shame he has brought on himself and family and regrets the bad decisions he’s made.’

After the court hearing Kitsons managing partner, James Cross, said: ‘Shortly after the acquisition our internal systems detected evidence of financial irregularities on a small number of files brought to the firm by Simon Armitage.

‘We immediately suspended him, alerted Devon & Cornwall Police and the Solicitors Regulation Authority, and launched a full in-depth investigation. Within days we had dismissed Simon Armitage and contacted all his former clients and estates.

‘Our priority was to look after Armitage & Co’s former clients which is why we made sure they all received the money that had been stolen by Simon Armitage as quickly as possible.’