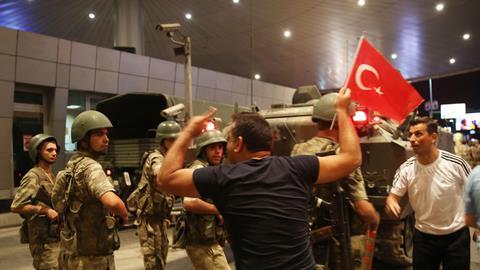 The UK legal profession has led international expressions of concern about the threat to the rule of law in Turkey in the aftermath of the attempted military coup.

According to the Turkish judiciary, 2,745 judges and prosecutors have been dismissed since the coup attempt on Saturday.

Expressing the Law Society's 'grave concern' at developments, president Robert Bourns said: 'The prosperity of a country is intrinsically linked to the rule of law and to a strong, independent judiciary and legal profession. The rule of law enables business and is fundamental to the cohesion of a powerful and diverse society. Stable legal institutions, an independent judiciary and a government accountable to the people are fundamental elements of a nation which is deeply rooted in the rule of law.'

He added: 'Given the importance of judicial independence, no member of any judiciary should be dismissed or suspended except for reasons of incapacity or behaviour that renders them unfit to discharge their duties, in accordance with the United Nations Basic Principles on the Independence of the Judiciary.'

Chantal-Aimée Doerries QC, chairman of the bar, said: ‘We are reviewing the situation carefully and have reached out to other European bar leaders to establish more information before determining our next response.’

She added that ‘this is not the first time this Turkish government has struck at the core of fundamental civil and democratic values.

‘In March, nine human rights lawyers, known for their work in representing minority groups and people accused of terrorism and crimes against the state, were arrested in police raids on their homes.

‘The judiciary and legal profession in any jurisdiction should not and cannot fulfil their duties under the threat of arrest.’

Condemning the attempted coup, the Istanbul Bar Association said: 'We hope that this grave attempt against the democratic system will display once again the vital importance of commitment to the rule of law, separation of powers, the need for an independent judiciary, freedom of expression and human rights.’