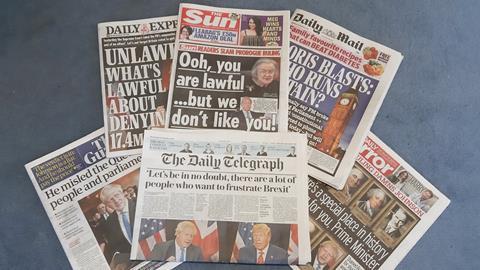 The lord chancellor has been forced once again to publicly defend the judiciary after the Supreme Court was accused of mounting a 'constitutional coup'.

'Boris Blasts: Who Runs Britain?' was the Daily Mail's headline, which said the PM had 'declared war on the judiciary last night'.

The Daily Express asked: 'Unlawful? What's lawful about denying 17.4m Brexit' - ignoring the first line of the court's judgment that the case was not about Brexit.

The Sun splashed with a picture of Lady Hale, president of the Supreme Court, and Johnson, under the strap 'Sun Readers Slam Prorogue Farce'. Its headline, 'Ooh, you are lawful...but we don't like you!', was a variation on a catchphrase used by long-dead comedian Dick Emery. The red-top said many of its readers 'blasted the "unselected" judges', and quoted Dave Martin, of Sheffield, who told the paper: 'The elite have shafted us again'.

According to the Mail, during a 'stormy' Cabinet conference call yesterday Commons leader Jacob Rees-Mogg accused judges of mounting a 'constitutional coup'. The Brexit Party's Annunziata Rees-Mogg, MEP for the East Midlands region, tweeted: 'Surely if the judges wish to politicise their role, they should be open to political scrutiny?' 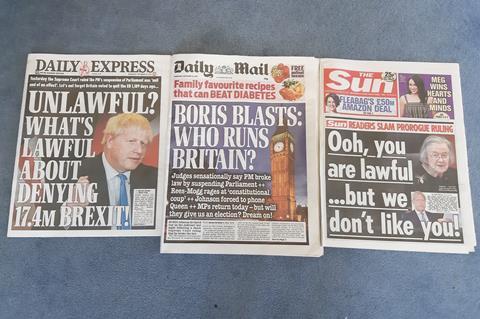 A selection of today's front pages

He said: 'We must all remember that our world-class judiciary always acts free from political motivation or influence and that the rule of law is the basis of our democracy, for all seasons. Personal attacks on judges from any quarter are completely unacceptable.'

Michael Gove, he added, was 'breathtaking in lack of humility' over the Supreme Court's decision: 'Disagrees with result, and whilst government will comply with judgment, asserts it was wrong. Johnson and Gove know better than Supreme Court. Arrogance on that scale is riding for fall after fall. Gove continues to assert that no one was misled. He doesn't understand the Supreme Court rejected in very clear terms the bogus explanation offered by the government - to prepare the Queen's Speech - for the prorogation.'

Writing in the Mail, Richard Ekins, head of right-leaning thinktank Policy Exchange's judicial power project, and associate professor of law at the University of Oxford, said yesterday's judgment 'is a milestone in a wider trend, in which those who lose out in the political process attempt to secure political advantage in the courts.

'It is part and parcel of the rise of the courts in our constitution, which is bad for democracy, bad for the rule of law and bad for judges themselves - many of whom recognise they should not be deciding political questions.'

Ekins said the court's duty is to 'follow the law, not to remake it. The problem is clearly not going to get better any time soon. The solution is to remind the judges about the proper limits of judicial power - and the place to start might be for the next parliament to restate the Bill of Rights's prohibition on judicial interference in parliamentary proceedings, and to strip the court of any jurisdiction to challenge prorogation.'

By contrast, the Mail's political columnist Peter Oborne said certain comments made by Boris Johnson's allies 'are troubling signs of a Brexiteer war on the judiciary, based on the false idea they are part of an out-of-touch "Remainer elite"'.

Oborne said the court's job was to administer justice impartially and with the utmost rigour, 'and that is what they did'. He added: 'I followed every day of the Supreme Court hearing avidly and there was no question that the proceedings were completely fair.'