The Serious Fraud Office was wrong to dismiss a solicitor over contested allegations that he called an American investigator a ‘c***’ on a trip to the pub.

Employment Judge Glennie concluded that Tom Martin, a senior case controller and senior lawyer, did call an FBI agent a ‘quisling’ in May 2016 but did not, as a matter of probability, use the word c***. In any case, the agent did not take offence at whatever was said on that evening. He concluded that if there had been a reasonable investigation by the SFO, these matters would not have led to Martin’s dismissal.

The judge accepted the SFO genuinely believed Martin had used all the words alleged and there were reasonable grounds to find that this would amount to misconduct. But he also ruled that accusing the agent simply of being a ’spy’ was not sufficiently serious to entitle the SFO to dismiss Martin without notice.

‘It cannot be a breach of the contract of employment to say to an officer of a friendly agency something that might have caused offence, but in the event, did not,’ he added. 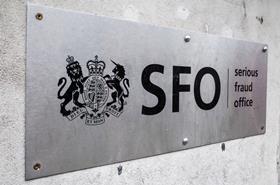 The judge also found a failure to investigate whether Martin had wilfully misrepresented the facts and concluded there were not reasonable grounds to make this finding against him. Martin should also have been given the opportunity to address any finding of dishonesty by his employer.

The judge said a ‘considerable divergence of recollection’ should have been expected from witnesses giving their account of a trip to the pub two years previously. It was also true that individuals’ recollection of events could have been influenced or prompted by others’ accounts.

The judge added: ‘Any reasonable employer would take the view that wilful misrepresentation of facts would involve something much more serious and considered than what the disciplinary process found in the present case.’

Appealing against his dismissal, Martin said this was an unfair and disproportionate response and that matters found against him did not amount to gross misconduct. He raised issues concerning the credibility of DOJ and FBI agents who had reported him and said their evidence was based on an incident from two years previously. Vulgar language, he submitted, was ‘commonplace’ in the world of criminal investigation and prosecution, and use of the words ‘spy’ and ’quisling’ in an informal setting could not bring the SFO into disrepute.

Martin pointed to his outstanding record as a case controller, the pressure he was under at the time, and the issues he faced dealing with a ‘very difficult’ relationship with US agencies.

The matter will now go to a remedies hearing. The SFO has said it is ‘carefully considering the judgment and all our options’.