A retired senior judge has evoked Hitler in a furious riposte to a former Law Society president over the Supreme Court’s decision in the prorogation of parliament case.

Sir Stephen Sedley, who retired from the Court of Appeal in 2011, also described solicitor Martin Mears’ verdict on the judgment as ‘so full of errors and inconsistencies it’s hard to know where to start’.

The pair have locked horns in weekly journal the London Review of Books, for which Sedley is a regular contributor. The retired judge concluded his 10 October article 'The prorogation debacle’ by stating that the court had ‘as much by its unanimity as by its reasoning, re-lit one of the lamps of the United Kingdom’s constitution: that nobody, not even the Crown’s ministers, is above the law’. 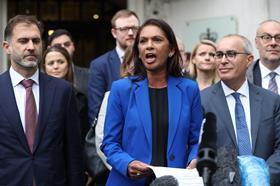 Gina Miller speaks to the media outside the Supreme Court

Norfolk solicitor Mears, however, took issue with Sedley on the magazine’s letters page. ‘The government’s defeat at the hands of the Supreme Court..was entirely political,’ responded Mears on 7 November. ‘Gina Miller and her supporters were not, of course, interested in pursuing an arcane point of constitutional law. Their avowed objective has always been to reverse the result of the 2016 [Brexit] referendum by one means or another. Does anyone believe that the justices, in their personal capacities, were not in sympathy with this objective?’

This provoked an equally blunt response from Sedley in the latest LRB, published this week. ‘That a former president of the Law Society, which is what Mears is, can ask rhetorically whether anyone believes that the 11 Supreme Court justices were not personally in sympathy with the objective of reversing the result of the 2016 referendum gives some measure of the depth to which public discourse has sunk,’ he writes.

Sedley goes on to allude to the enabling act which made it possible for Hitler's 'cabinet' to override parliament. ‘Is Mears proposing such a measure for the UK?’ asks Sedley, alluding to Mears’ assertion that the court could be 'confined' to its ‘proper sphere’ by a ‘one-paragraph act of parliament’.

Martin Mears is famously outspoken. In 1995 he won the first contested election for Society president in decades, on what one national newspaper described as a ‘populist’ ticket to ‘shake up the Chancery Lane establishment’. He made history by standing for the presidency again in 1996, but was defeated.