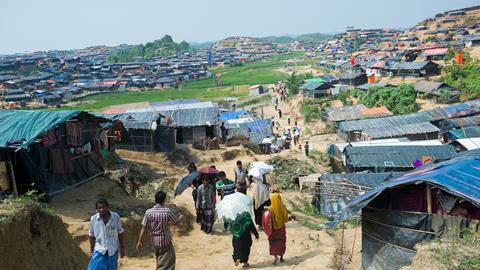 Prosecutions for crimes committed during the forced displacement of 727,000 Rohingya from Rakhine State, Myanmar, may fail because of a casual and uncoordinated approach to taking witness statements, an international criminal law expert has warned.

Nina Tavakoli, a barrister at Red Lion Chambers who visited Rohingya refugee camps in Bangladesh at the end of 2017, warned a meeting in London last night: ‘There is little coordination between actors documenting. There is a risk of repeat interviewing. That’s bad for witnesses… [with] survivor fatigue, people might stop talking.’

She said: ‘Criminal lawyers are critical of [the approach] of human rights actors.’ Defence lawyers in international criminal trials had a record of successfully exploiting inconsistencies in witnesses’ recorded statements she noted. The danger of ‘multiple inconsistent statements’ was that ‘the credibility of witnesses’ was undermined.

Tavakoli, who was a prosecutor at the Sierra Leone and Rwanda tribunals, warned the expertise, environment and timing for taking statements was currently not in place. She said: ‘It’s a very challenging environment in which to document crime. It’s quite a chaotic refugee camp. Many are finding a real problem with sex and gender-based violence.’ For taking sensitive statements, including allegations of sexual assaults, ‘there is a lack of appropriate private space’, she added.

An added complication was that the camps were relatively accessible, which had led to ‘VIPs’ moved by the plight of the Rohingya refugees arriving in ‘streams of Land Rovers’.

Tavakoli’s remarks were made at a panel discussion on ‘challenges to international accountability’ organised by Red Lion Chambers and hosted by international firm Hogan Lovells.

Other speakers included Ambassador Stephen Rapp, who led the prosecution of former Liberian president Charles Taylor at the Special Court for Sierra Leone. Rapp said: ‘Because of impunity, people who kill hundreds then kill thousands, [and then] tens of thousands…. We need to lay the foundations of accountability, including criminal prosecutions.’

In bringing some successful prosecutions, Rapp noted, evidence of ‘incitement’, was important and could succeed. ‘It is possible to draw a link between the rhetoric’ and subsequent crimes, he said.

The International Criminal Court has decided is has the authority to exercise jurisdiction over the deportation of Rohingya from Myanmar to Bangladesh, following an amicus curiae brief filed by Tavakoli for a group of non-state Bangladeshi organisations.