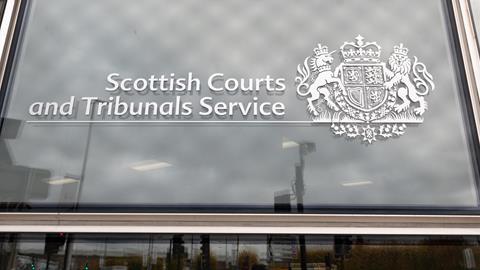 Tensions in a legal aid row between criminal defence practitioners in Scotland and the Scottish Courts and Tribunals Service (SCTS) have escalated following claims that a solicitor was removed from a court building last weekend.

Last week the Scottish Solicitors Bar Association announced that solicitors across Scotland had voted to withdraw from the duty solicitor scheme during COP26 ‘to demonstrate what will happen if the current decline in the legal aid profession is not addressed’.

Yesterday, Edinburgh Bar Association announced that, while it was boycotting the custody court, one of its members was told by a Police Scotland officer that they had to leave the building and no explanation was given.

In an open letter to the Sheriff Clerks at Edinburgh, the association said: ‘We are all solicitors who attend Edinburgh Sheriff Court day in and day out and have, for over a century, gone about our business free from interference. The interference that occurred on Saturday was entirely unjustified and unacceptable. We can no longer be comfortable that we are going to be able to do our jobs given this intrusion into our professional lives.’

Members of the association refused to conduct any business in court yesterday until further explanations were given.

Responding, David Fraser, executive director of court operations for SCTS, said a solicitor was asked to leave the court building at the request of an SCTS member of staff. ‘This followed SCTS staff being advised that the solicitor was within the cell area advising prisoners, who were not his clients, by discouraging them from using the duty solicitor. Contrary to social media reports, the solicitor was not in consultation with a nominated client when asked to leave the court building and we understand had no further advice, instructions or nominated client representation to undertake that day. The court had facilitated his consultation with his client,’ SCTS said.

Martin said: ‘The solicitor in question was there in his capacity as an EBA representative. He was advising accused persons of their rights, including their right to represent themselves, and providing leaflets explaining why their nominated solicitor was not present. He was doing so on our behalf, as has been done on any occasion when we have taken action in respect of custody courts, including by myself on a previous occasion.’

He added: ‘These consultations between our representative and accused persons are entirely confidential, and take place in secure booths in the cell complex. This begs the question of where the erroneous suggestion of a dissuasion from using the services of the duty solicitor originated? Indeed, it has come to my attention that there was actually gratitude expressed to our representative by one of the duty solicitors present for explaining matters to accused persons so that they did not have to.

'Are we approaching a situation whereby if SCTS do not like the advice offered to an accused person, then that accused person's representative can be summarily ejected from the building?’