The Court of Appeal has dismissed an attempt by solicitors to secure a £2m payment from an insolvent client for work carried out on a damages based agreement.

The parties disputed section 73 of the Solicitors Act which allows the court to grant a charging order in favour of a solicitor over property recovered or preserved in litigation. In July 2021, Mr Justice Zacaroli ruled that Candey had no entitlement to any payment from Wojakovski and no equitable interest in his shares in Tonstate.

The City firm had tried to argue before the court that its former client Edward Wojakovski had derived a benefit from its work when he was permitted to retain some shares through a settlement in litigation with Tonstate. 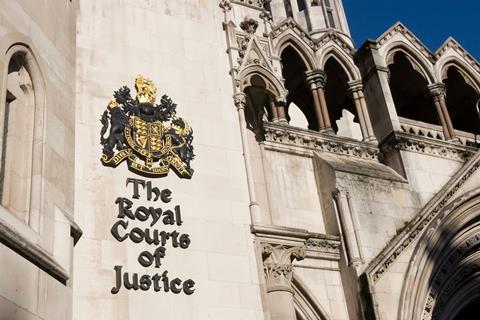 Ben Williams QC, representing Candey, said Wojakovski had retained 25% of his shares and that the firm was allowed to recover its costs based on not just what was recovered but what was preserved.

He argued that Candey would not have agreed to an arrangement where it was required to win ‘absolutely everything’ in litigation in order to received any payment.

He added: ‘There was an asset which was in contention. There was an attempt to confiscate it altogether – if that attempt fails you have derived a benefit. You still have a fund out of which you can pay.’

Asked by Lord Justice Arnold whether the £2m invoice had been ‘plucked out of thin air’, Williams said the figure was not set in stone. He conceded that the DBA signed with the client ‘clearly can be criticised in a lot of respects for not being fully fleshed out’.

The respondents to the appeal said the claim was a continuing attempt by the solicitors to ‘push themselves to the front of the queue of creditors’ of their bankrupt client. Tonstate’s representative Andrew Fulton QC said Candey was not a creditor and the DBA did not as a matter of construction give it any right to payment merely for having preserved a proportion of Wojakovski’s pre-existing property.

Fulton added: ‘The drafting of the DBA may be poor but its effect is clear: the terms of settlement of the shares claim did not give Candey any right to payment.’

Appeal judges took less than five minutes to discuss submissions before returning to say that the challenge was dismissed.

Following the decision, Shlomo Rechtschaffen, of London firm Rechtstaffen Law which represented Tonstate, said: ‘We are pleased that we won the appeal. We are waiting to see the reasoning of the judges in the hand down, which will undoubtedly be of significant importance to many practitioners.’

In a statement, Candey partner Leo Nabarro said the court appeared to be stopping defendants from taking advantage of DBAs to protect their assets.

He said: ‘This creates an unfortunate and unfair imbalance in favour of claimants over defendants as the regulations are flawed. That is why Camdey relied not on the regulations but the enacting higher legislation that sought to allow lawyers to be remunerated in accordance with their provision of financial benefit.

‘We will always fight our corner and advocate for lawyers’ rights, whether we win or lose. This is not simply to line our pockets (although as a business that is our aim) but because lawyers’ rights are the cornerstone of a civilised society because these rights in turn empower the people. There must be a recognition by the courts and government that an inequality of arms between defendants and claimants is inherently unjust and abhorrent in a civilised society.’

The firm will wait for the written judgment before deciding whether to appeal to the Supreme Court.