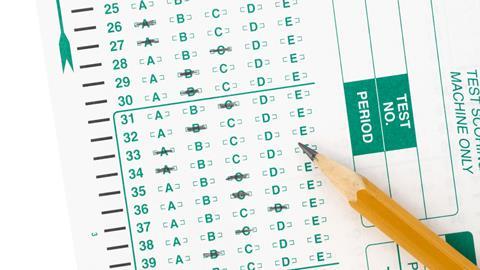 The first stage of the solicitors’ ‘super-exam’ could be entirely multiple choice after a piloting exercise found that the written section could place members of ethnic minorities at a disadvantage, the Solicitors Regulation Authority (SRA) has revealed.

The Solicitors Qualifying Exam (SQE) is a single assessment for qualifying solicitors, which is being developed by the SRA and assessment provider Kaplan for introduction in 2021.

SQE1 – which candidates must pass before taking SQE2 – was due to contain a multiple-choice legal knowledge test and a written skills test. At a press briefing yesterday however, the SRA announced that it is considering scrapping the skills section. This would leave only the multiple-choice question paper.

An independent review found the written skills assessment ‘raised significant concerns about reliability, fairness and standard setting’. The pilot suggested that black, Asian and minority ethnic (BAME) candidates, for example, were disadvantaged compared with white candidates even when their performance in the multiple-choice test was taken into account, according to the review.

The SRA said: ‘The results suggested the skills part of the SQE1 may set an unnecessary barrier to qualification which disadvantages BAME candidates, which would be unacceptable.’

Independent reviewer Geoff Coombe added: ‘Analysis suggests the nature of the skills being assessed, twinned with the style of assessment, appears to have advantaged certain candidate groups.

According to the regulator, 40% of the 316 people who took part in the pilot were BAME; of those 16% did not have English as their first language.

Julie Brannan, the SRA’s director of education and training, said: ‘This is not an uncommon pattern in higher education. But that doesn’t let us off the hook. We need to make sure our assessment is fair and robust.’

The pilot also revealed that the written test – in which candidates scored between 8% and full marks – had ‘insufficient assessment points’ to yield reliable results.

The SRA confirmed that if SQE1 consists only of a multiple-choice exam, the running cost of the assessment would go down. A spokesperson for Kaplan said: ‘It is a really economic method of testing which is an advantage when it comes to an exam that is trying to be affordable.’

Meanwhile, the Justice Select Committee (JSC) has written to the Legal Services Board seeking clarity regarding the SQE. In its letter of 23 July 2019, the JSC states ‘we remain unconvinced that enough attention has been paid to the potential long-term impact of removing the requirement for academic study of law’ and expresses concerns over a ‘two tier training regime’.

In June, junior lawyers criticised the ‘super-exam’ claiming it would lead to a lowering of professional standards.

Amy Clowrey, chair of the Junior Lawyers Division, wrote: ‘The JLD has significant concerns about elements such as the removal of the requirement to study academic law substantively and assessment by method of multiple-choice question examination.’

Law Society president Simon Davis said: 'The Law Society has continuously raised concerns about the testing methods used in the SQE 1 – including the skills assessments and use of multiple-choice questions. It is positive to see the SRA reflect on the results of the first pilot and we will continue working to ensure the SQE does not create a barrier for anyone looking to enter the profession.'

SQE1 is due to be introduced in autumn 2021, while SQE2 will be introduced the following year. Aspiring solicitors will no longer have to complete the Legal Practice Course (LPC) and preparatory courses are not required or specified by the SRA.

SQE2, which is entirely skills-based, will be trialled in December.