A campaign to find a matching stem cell donor for a five-year-old girl has struck a chord across the legal profession. Kaiya Patel of Northwood, northwest London, was diagnosed in March with acute lymphoblastic leukaemia. Her case highlights the lower survival rate from leukaemia among children from minority ethnic communities because of the difficulty of finding matching donors. 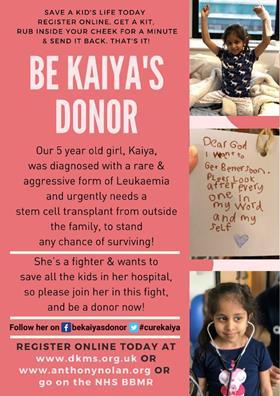 Kaiya’s uncle, Subir Desai, partner at Mayfair property firm Charles Douglas Solicitors, told the Gazette: 'Kaiya has a very rare and aggressive form of leukaemia. Put simply if a match is not found in the coming weeks/month our dear Kaiya will be lost to us.

'Great Ormond Street are treating her and the major stem cell donor operations are working hard to support the family. However as yet no donor match has been found and this is partly to do with the lack of Asian donors in the UK. Although there is an immediate and pressing need to cure Kaiya there are very real and serious issues surrounding why an ethnic minority child has less prospects of survival in comparison to caucasian children. It is tragic and needs to be addressed by all community leaders.’

The campaign has already attacted widespread coverage on broadcast and social media says Desai, who is working with his wife Aalapi to alert Asian lawyers in particular. 'We are both solicitors as is the father Ruchit Patel, so the support from our legal community would be magnificent.’

For further information go to Be Kaiya’s Donor on Facebook or see the Anthony Nolan Trust website.