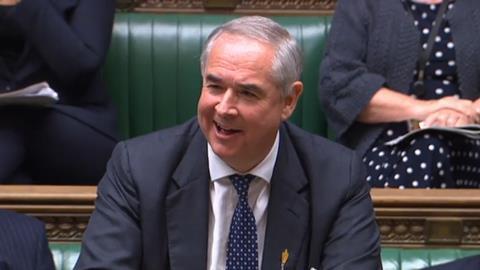 Supreme Court justices may have to be approved by politicians, the attorney general today suggested, despite telling MPs that he firmly supported the independence of the judiciary.

MPs returned to the Commons chamber for the first time since the Supreme Court ruled that Boris Johnson's prorogation of parliament was unlawful. They grilled Geoffrey Cox on the legal advice that was given to the Queen.

Asked whether he believed yesterday's judgment represented a 'constitutional coup', Cox said: 'I don't think it was a constitutional coup. These things can be said in the heat of rhetorical and poetical licence.'

Even though the government did not agree with the court's ruling, Cox said 'we are proud that we have a country that is capable of giving independent judgments of this kind'. He added that he 'completely and firmly' supported the judiciary's independence.

However, when asked whether Supreme Court appointments should receive parliament's formal approval, Cox said: 'I think it is a matter which this house may need to reflect upon in the coming months and years, depending on the status of our constitutional arrangements.

'As we leave the European Union, a great gap opens up, whereby we take away from legal integration all this European Union law, and we need to think about the implications. I therefore agree that there may very well need to be parliamentary scrutiny of judicial appointments in some manner. I have to say that I am not enthusiastic about that.'

Cox insisted that the Queen was given 'sound advice'. In disagreeing, the Supreme Court made new law, he said.

The attorney general added: 'From now on, the prerogative power of Her Majesty, advised by the prime minister, can be the subject - the justiciable subject - of the court’s control, and that was a judgment that the Supreme Court was perfectly entitled to make.

'What the implications are for the future of our constitutional arrangements will have to be reflected upon in the coming months and years, but it is never wise to reflect upon a court case and its implications in the immediate aftermath of that case. It will have to be done carefully and deliberately, and this house will have to decide, ultimately, whether these matters and these powers are for this house to regulate and control, or whether they are for the judiciary; but, at the moment, the Supreme Court has spoken, and that is the law.'

Law Society deputy vice president I. Stephanie Boyce commented: 'An independent judiciary is fundamental to our democracy. The notion of vetting judges for their political opinions is at odds with the whole construction of British justice. In our system, when judges rule on an issue, it is on a point of law. The Supreme Court’s ruling this week addressed a legal point about prorogation. We are all bound by law to accept that ruling – even those who wish it had gone another way. It is worth noting judges spell out their reasoning in full in their judgments – so everyone can easily understand why the decision was reached.'