According to the Supreme Court’s annual report, permission to appeal applications (PTAs) concerning judicial review outnumbered all other types of application, with 34 determined between 1 April 2020 and 31 March 2021. Just 23 judicial review PTAs were considered the previous year, while 10 were determined in 2018-19. However, the overall number of cases filed at the Supreme Court fell as a result of the pandemic. The number of appeals dropped from 70 to 42 year-on-year, for example, while the number of PTAs fell from 232 to 217. 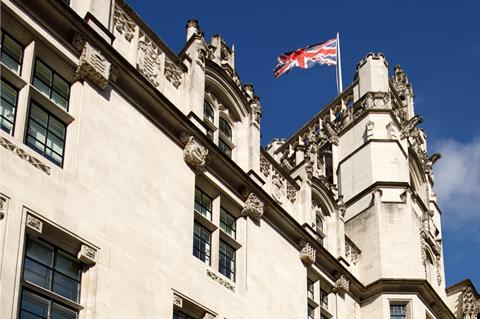 Supreme Court: Overall number of cases filed last year fell as a result of the pandemic

Despite pandemic pressure, the Supreme Court managed to deliver 54 judgments – the same number as in 2019-20. Meanwhile, president of the Supreme Court Lord Reed of Allermuir said no case was adjourned because the court was unable to provide a hearing.

‘It is a tribute to the hard work of fellow justices and the staff of the court, in particular the IT team, that we have been able to continue to deliver a high level of service to the public, to litigants and to the legal profession,’ he said.

The JR figure could add fuel to the debate on the government’s public law reform plans. In its consultation document following the report of the Independent Review of Administrative Law, the Ministry of Justice identified a ‘growing tendency for the courts in judicial review cases to edge away from a strictly supervisory jurisdiction, becoming more willing to review the merits of the decisions themselves, instead of the way in which those decisions were made. The reasoning of decision-makers has been replaced, in essence, with that of the court.’

The consultation attracted damning submissions from prominent bodies such as the Law Society, the Bar Council, Liberty, and Public Law Project.

Chancery Lane said it was alarmed by the scope of the proposals, which include prospective-only remedies and ouster clauses that were not recommended by Lord Faulks QC and his review team. Meanwhile, the Bar Council criticised the government for failing to think through how its proposed judicial review reforms would work in practice.