Former lord chancellor Liz Truss doubtless still carries the scars of her brief tenure at the Ministry of Justice. She is chiefly remembered for uniting the legal profession in dismay over her limp defence of the judiciary amid the ‘Enemies of the People’ furore.

Now chief secretary to the Treasury, Truss had the profession in her sights again yesterday when she delivered a provocative speech arguing that some middle-class professionals - including lawyers, doctors and teachers - constitute a ‘blob’ that harms the economy. 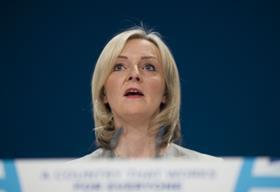 Describing herself as ’instinctively pro-disruption and anti-vested interests’, Truss accused ‘elements’ within British professions of ’constantly lobbying to to put barriers up to prevent people joining them’.

People wih a ’vested interest in more government’ want ’a thicket of regulation to grow, as they are the ones who know how to hack through it,’ Truss, told an Investing in Britain Forum.

She added: ’They say they want to protect people and jobs. They say they only want this tiny change in legislation. And they will ask again and again for government favours – arguing that they are the exception, that their cause deserves coddling and sympathy.’

Truss stressed that professional regulations ’can be a damaging restraint on trade’, describing licensing as the ’most restrictive form of occupational regulation in the UK’.

Truss said the government is ‘working hard’ to address this, by setting up alternative business structures ’which can provide certain legal services without having to identify as a law firm’, together with free schools and nurse associates in hospitals.

’But we must try harder,’ she added.

Truss’s use of the word ‘blob’ as a pejorative description of professionals carries echoes of her predecessor at Petty France, Michael Gove. Just as Gove did as education secretary while he battled to reform schools, Truss likened the government’s plight to the dilemma facing Steve McQueen in the 1958 science fiction film, 'The Blob', about an amoeba eating up the world.