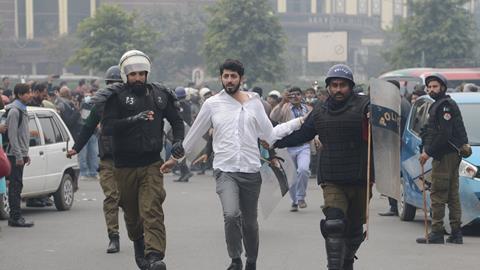 At least three people have died in an extraordinary outbreak of violence between lawyers and doctors in Lahore, Pakistan's second largest city. Lawyers angered by video clips of doctors making fun of the profession yesterday stormed the Punjab Institute of Cardiology where they ransacked wards and attacked staff.

Human rights minister Shireen Mazari accused the lawyers of killing hospital patients by pulling off their oxygen masks. 'This is sheer terrorism - nothing less. Govt must and will act,' she wrote on Twitter. Press reports said that 52 lawyers were arrested and were expected to appear before an anti-terrorism court in Lahore today.

Syed Amjad Shah, vice chair of the Pakistan Bar Council, condemned the violence, describing the protest as 'the individual act of a few lawyers'. The English language daily Dawn quotes Shah as blaming the medical profession for starting the trouble.

The newspaper said about 200 lawyers were involved. The protesters claimed that lawyers had been enraged by video clips showing doctors making fun of lawyers who had demanded police charges against a doctor at the institute. It attributed the deaths to ambulances being unable to reach the hospital in time and to patients in the hospital being left untreated in the chaos.

Describing the incident as 'a stain on our collective humanity', a Dawn columnist writes: 'are we living in Pakistan or the Planet of the Apes?'