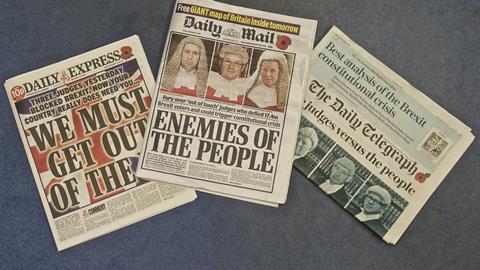 Truss urged to speak out amid press onslaught on Brexit judges

Lawyers have reacted with alarm to savage attacks from the press and politicians on the ‘activist judges’ who handed down yesterday’s landmark Brexit ruling. Shadow lord chancellor Richard Burgon, meanwhile, a qualified solicitor, has urged Liz Truss to speak out in defence of judicial independence.

The Daily Mail led the way this morning with a page one splash featuring pictures of the trio - lord chief justice Lord Thomas, master of the rolls Sir Terence Etherton and Lord Justice Sales - above the headline: ‘Enemies of the People’. The more sympathetic Mirror noted dryly that ‘Enemies of the People’ is the title of a film about murderous dictator Pol Pot.

The Mail report alludes to calls at Westminster for a review of the way senior judges are appointed, also quoting former justice minister Dominic Raab as saying an ‘unelected judiciary’ must not be allowed to ‘thwart the wishes of the British public’.

In a fulminating full-page leader, the Mail concedes that ‘on a blinkered reading of statutes and such very few precedents as exist’, it is possible to argue the government does lack the authority to trigger Brexit without the authority of parliament.

But it adds: ‘Wouldn’t any judge of real stature (the late Lord Denning springs to mind) have picked a way through the dust-encrusted legal textbooks to see the wood for the trees and come down on the side of reason?’

The paper is not confident the Supreme Court will reverse the judgement, alleging that the judiciary is ‘so infested with Europhiles that judges disgracefully slow-handclapped and booed a pro-Brexit speech by Michael Gove at a legal dinner’ .

Reports in a similar vein appear elsewhere, with The Sun reporting that the judges have ‘overruled the nation’, and the Telegraph featuring the headline: ‘The judges versus the people’.

The Express, meanwhile, joins the Mail in probing the backgrounds of the trio – noting that Lord Thomas was a founding member of the European Law Institute. In early reports, the Mail described Etherton as an ‘openly gay ex-Olympic fencer’, though this was later amended.

The onslaught will renew fears over threats to legal independence in England and Wales, which were heightened recently when the emergence of a worrying trend was identified in a report from the International Bar Association. Among other things, that report raised concerns over political attacks on lawyers involved in military cases.

The Law Society has been among those warning that political attacks on lawyers risk undermining the independence of the legal profession, the rule of law and the separation of powers.

This latest furore prompted lawyers to take to social media in defence of the judiciary.

On Twitter Nigel Pascoe QC of Pump Court Chambers urged colleagues to ‘condemn hysterical attacks on the judiciary’, which are ‘far too serious to be ignored’.

@DailyMailUK This attack on serving Judges is utterly contemptible. You have reached a new low. This way lies anarchy.

‘This is getting completely out of hand,’ he said. ‘If The Daily Mail speaks of judges as enemies of the people, democracy is being undermined. Shame!’

Barrister blogger Matthew Scott tweeted: ‘We can deal with these judges. Dismiss 1000. Lock up 1000. The rest will do as they’re told. It works. #Turkey. #EnemiesofthePeople.’

Gazette columnist Joshua Rozenberg said on Facebook: ‘Its does these papers no credit that they are attacking the judges rather than their judgment.’

The judges receive a more sympathetic hearing in left-of-centre publications. The New Statesman laments a ’new low for UK newspapers’, while columnist Ian Jack in the Scottish Review suggests England is heading for a ‘populist tyranny’.

’Independence of the judiciary is essential for the preservation of the rule of law, must be applied free from political pressure, and requires due process, whether the Daily Mail likes it or not,’ he writes.

Shadow justice secretary Richard Burgon MP said 'judges are there to interpret the law regardless of their views' and 'that is what they have done'. Describing some of the headines as 'unacceptable', he urged justice secretary Liz Truss to come to the judges' defence, tweeting: 'It is the lord chancellor's job to uphold the independence of British judges and she must speak out urgently against the hysterical headlines of some papers and these attacks on British justice.'

The Bar Council has this afternoon intervened to defend the judges, all former barristers.

Chairman Chantal-Aimée Doerries QC said: 'As the judges made very clear in the judgment, this case was not about the merits of leaving the EU. It was about the constitutional processes for triggering article 50. It is the judiciary’s role to ensure the rule of law underpins our democratic system. Without it fulfilling this vital role, the people would have very limited scope to hold the government in power to account.

’The judiciary of England and Wales is the envy of the world because it is independent of government or any other influence. When we speak to lawyers in other jurisdictions, it is our judiciary that they particularly praise for its professionalism and independence.

'Publicly criticising individual members of the judiciary over a particular judgment or suggesting that they are motivated by their individual views, political or otherwise, is wrong, and serves only to undermine their vital role in the administration of justice. It also does no favours to our global reputation.

Disgraceful, irresponsible reporting which has no place in a society which values rule of law, democracy & equality pic.twitter.com/6DSAjPQLdD

'None of the parties suggested that the court did not have jurisdiction to decide the point at issue. They are simply doing their job – impartially ruling on a dispute between parties, one of whom happens to the government in this instance. The right to appeal is there to challenge the court’s decision if a party feels they have grounds to do so.

'While acknowledging that this question is one of potentially significant constitutional importance, the independent role of the court should be respected, particularly by those who disagree with the outcome.’

The Criminal Bar Association, meanwhile, took to Twitter to berate 'disgraceful, irresponsible reporting which has no place in a society which values rule of law, democracy and equality'.

The IBA's September draft report on threats to the independence of the legal profession identified a hostile media climate as a ’threat indicator':

It said: 'Threats to the standing of the legal profession, and therefore the lawyers’ ability to fulfil their role in society, can also come from the media. While the media can act as a watchdog to inform, educate, and promote public awareness and accountability, sensationalist and misinformed media commentary can diminish respect and appreciation for the fundamental Rule of Law principles and the role of the legal profession in upholding those principles.

'Where there is a gap in communication between the media and the profession, it can contribute to the erosion of them perception of lawyers’ role in society, through portrayals of lawyers in ways that could undermine the credibility and the overall image of the profession.'