The first signs of criticism emerged this week of the opening legislative move in the government's court reforms.

The Courts and Tribunals (Judiciary and Functions of Staff) passed its second reading in the House of Lords yesterday and is expected to reach committee stage before the summer recess. Delegating judicial functions to court staff, the bill is deliberately narrow in scope and should be the first in a series of pieces of legislation to replicate the aborted Prisons and Courts Bill last year.

The Bar Council said it had ‘major reservations’ about what was included in the bill, including that the limited scrutiny of how judicial functions are being carried out and how the relocation of case management functions will work in practice.

In its briefing note, the barristers’ representative said without clear limits on the expanded role of ‘authorised staff’ the bill has the potential to create a ‘fundamental shift’ in the nature of UK justice.

The note added: ‘Our adversarial system requires independent judges. This is not compatible with a system in which decisions are routinely made by individuals, including those at a relatively junior level, who are directly employed by the government, and who are not subject to the training, experience, ethos and oaths of professional judges.’

It also raised concerns about the qualifications expected of authorized staff, with nothing on the bill to stipulate legal experience. 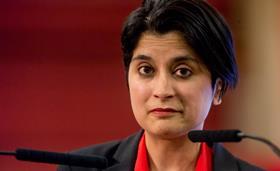 The Bar Council also warned against the government’s ‘drip feed’ approach – a phrase adopted by Labour’s Lady Chakrabarti (Shami Chakrabarti0 in the Lords debate – by introducing bills at different stages. This, it was claimed, makes it more difficult to scrutinise the overall aims of the reform programme, which includes provision for an online court.

Chakrabarti, the shadow attorney general, said: 'Without limits on who can be authorised and what powers can be given to authorised persons, this delegation has the potential, as currently drafted, to change the essential nature of our justice system. This is a wafer-thin bill which, on its face, is apparently uncontroversial. However, it is the beginning of the fulfilment of a further ambitious programme. The government appear to be testing the waters for more controversial court reforms and it is vital that we understand the limited provisions in the bill in the context of that broader agenda of reforms and devastating cuts.’

He added: 'Modernisation must ensure that the judiciary and staff who work in our courts and tribunals are empowered to deliver smooth and efficient justice. We have a world-class judiciary, and through the bill we want to enable it to continue to deploy its time and expertise where and when it is most needed.’