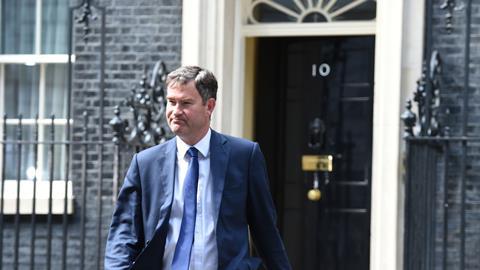 'Whoever has the privilege': Gauke on the brink of departure

David Gauke today all but confirmed that he is about to resign from the Cabinet in what could be his final speech as lord chancellor and justice secretary.

Gauke today called for an 'evidence led' approach to tackling reoffending to cut crime, highlighting new research that he says has reinforced his view to move away from short prison sentences. But it is the final lines of a speech he delivered at an event hosted by the Social Market Foundation, a thinktank, that suggests he is about to step down.

He said: 'I believe that the approach that I’ve set out today - indeed the approach I have set out in the last 18 months - is one that is most likely to be effective in reducing reoffending and therefore reducing crime. I am aware that it is an approach that will not have universal support but I have taken great encouragement from the widespread support for an evidence-led, rehabilitative and humane agenda.

'It is my hope that in the years ahead - whoever has the privilege of being justice secretary - it is an approach that will be pursued with persistence and determination and courage. And that it will help deliver a safer and more civilised society.'

Gauke is the sixth lord chancelllor since the Conservative-led coalition took office in 2010. He is the first solicitor in the ancient office.

According to ITV political correspondent Paul Brand, Gauke has not ruled out voting for amendments today (led by former attorney general Dominic Grieve QC) which attempt to prevent a future prime minister proroguing parliament. This would require his resignation from the government.

Gauke, who backed his former MoJ colleague Rory Stewart in the Conservative leadership race, has already indicated that he would not serve under a government led by Boris Johnson.

Appearing on the BBC's Andrew Marr show this month, the host suggested that Johnson would sack Gauke. Gauke told Marr: 'I suspect I will possibly have gone before then.' He explained that if Johnson required the cabinet to sign up to being prepared to leave the EU without a deal on 31 October, he would be unable to support that policy and would resign in advance.

In a speech at the Lord Mayor's Banquet, he joked: 'Indeed, I am the first lord chancellor in a while to have served long enough to deliver two of these speeches. It is true that my predecessor but two, Michael Gove, made it to his second speech but he left the government one week later when a new prime minister, with whom he did not see eye to eye, took office. How times have changed. I might only have three weeks.'

Gauke's imminent resignation could explain the extraordinary speed at which bills on divorce reform and domestic abuse have been introduced to parliament.