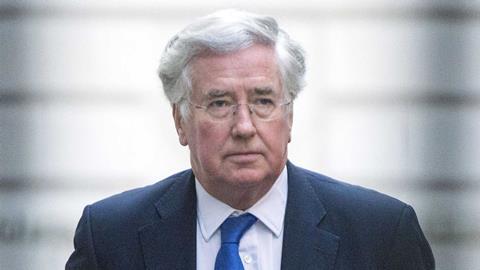 Correspondence disclosed today by the SRA shows that the regulator cooperated closely with government in connection with its high-profile and ultimately fruitless investigation into human rights firm Leigh Day.

That interaction included lobbying the Ministry of Defence to back reform of the disciplinary process, when claims against the same government department lay at the heart of the Leigh Day prosecution.

Chief executive Paul Philip wrote to former defence secretary Sir Michael Fallon asking for a meeting to discuss policy issues relating to legal regulation. The MoD was the complainant in the Leigh Day case, having been the defendant in ultimately successful claims by Leigh Day on behalf of Iraqi civilians.

In April 2016, more than a year before the start of the substantive Solicitors Disciplinary Tribunal hearing, Philip wrote to Fallon referencing the ongoing investigation and raising concerns about the way the tribunal operated. These concerns included the criminal standard of proof, solicitor majorities on panels and a ‘willingness to hear matters in private’.

Philip concluded: ‘I appreciate how busy your diary will be but hope we can arrange to meet to discuss these important issues.’

Responding, Fallon thanked the SRA for taking the MoD’s concerns seriously and welcomed the chance to discuss further the ‘manner in which the SDT operates’.

The meeting appears to have happened by June 2016, with SRA external affairs chief Jane Malcolm also in attendance. Philip then wrote to Fallon again, this time discussing the independence of the SRA from the Law Society and asserting that the tribunal arrangements ‘require root and branch overhaul’. Philip added: ‘We appreciate your support on this issue.’

Details are also disclosed of Philip’s reply to backbench MP Chris Philp, dated February 2016, explaining why the investigation was taking so long. This letter concluded: ‘I am of course happy to meet up to discuss our regulatory model and wider work.’

The 125-page disclosure of correspondence largely consists of blank pages or copies of emails, but there are several instances where Ministry of Justice officials request information about the case under pressure from ministers. At one stage, SRA executive Crispin Passmore (referred to just as ‘Crispin’) is asked whether the regulator is investigating how Leigh Day found its clients and established their authenticity.

An MoJ official asks Passmore in February 2015 for a ‘bit of clarity on what the SRA is investigating’, and specifically how far back the investigation goes. The MoJ official goes on: ‘Would it be possible for me to run a few lines by you, for an accuracy check, as we are putting advice up and want to ensure we don’t misrepresent what the SRA is doing.’

Another email asks David Middleton (‘David’), SRA executive director, for an ‘urgent update’ on progress with investigations into Leigh Day and Birmingham firm Public Interest Lawyers. The request notes: ‘I understand there is a limit to what you can share, but if you could say where the investigation has reached, and timeframes for any further steps, it would be appreciated.’

Today’s disclosure only relates to correspondence made available to the SDT, which can be published now the case has finished. The SRA has not published case evidence and case correspondence with the complainant - in this instance the Ministry of Defence - in line with usual practice.

In another email, an unnamed SRA official writes to the MoJ, saying: ‘Ministers can rest assured we know how important it is that we do a very good job on this and that public has to have confidence in our investigation and outcome of it.’