‘Zero’ bug in whiplash portal stopping claims getting through

Overseers of the whiplash portal say they have uncovered a glitch in the system stopping lawyers from filing claims.

Official Injury Claim, run by the Motor Insurers’ Bureau, contacted users yesterday to say it had been made aware of an issue with offers which may be preventing some claims from progressing.

The fault occurs when compensators (usually insurers) input ‘£0’ instead of ‘£0.00’ during the ‘create an offer’ phase for items with zero value. It is believed the problem affects claimant representatives who use external systems connected to the portal’s software, rather than those accessing the portal directly.

The OIC memo said: ‘We are currently testing a fix for this bug which we expect to go live on or before 14 February. As a practical solution, if compensators are able to inform their handlers to ensure zero values are entered as £0.00 until the fix is implemented, claims can continue through the process normally.’

Matthew Maxwell Scott, executive director of the Association of Consumer Support Organisations, said this issue was the sort of problem that should have been anticipated during the design process. Critics have said the planning stages were rushed in order to meet the government’s revised target of setting the system live last May. 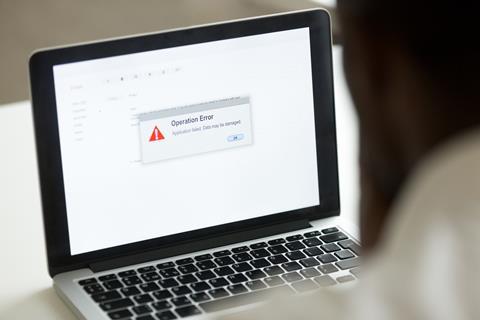 ‘Either the planning or the testing were deficient - and once again it’s the consumer who is losing out. Why it needs a further month to be resolved is beyond comprehension,’ said Maxwell Scott.

‘The added frustration is that we and others have offered our support in identifying and smoothing out these sorts of issues but our help hasn’t been wanted. It calls into question the ability of the MoJ or its partners to deliver these sorts of programmes in future and only serves to underline that industry-led solutions are much more likely to prove successful.’

The glitch has come to light to in the same week that it emerged enquiries are to be held into why more litigants in person are not using the system, with 90% of claims thought to be from people represented by a solicitor.

The portal was designed around being user-friendly for unrepresented people, with OIC tweeting this week that anyone injured in a car accident ‘can claim without specialist knowledge’. Critics have pointed out the user guide for LiPs runs to 64 pages, with Maxwell Scott previously describing the document as ‘legal treacle’.