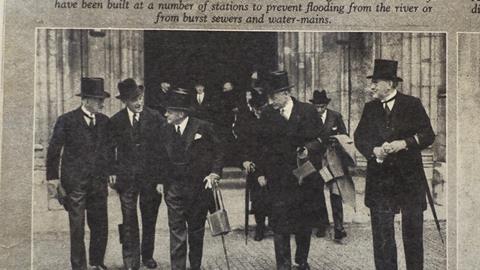 'No procession, no breakfast'

The legal profession is in two minds about the traditional opening of the legal year. With senior members of the judiciary under heavy public scrutiny following the Supreme Court judgment on prorogation, what is wiser – a ceremonial show of strength, all elaborate wigs and gowns, and the usual Westminster Abbey procession, service and breakfast for 700 people? Or try something more low-key?

Perhaps senior judiciary could even dress down a bit, and lose the wigs. Maybe they could still go to the abbey, but have breakfast before they leave home so they can just get back to work after a quick prayer for appropriate divine guidance in their judgments.

If Obiter sounds dangerously radical for mooting this, it is worth noting that there is a precedent. We are indebted here to district judge Lorna Grosse, who sits in the Court of Protection and Bromley Family Court. Clearing out her late parents’ garage, she came across a copy of Picture Post from 21 October 1939, a few weeks after the outbreak of war.

Along with a comment piece by prime minister Neville Chamberlain and various lifestyle features, the ‘Life for London’ photo pages pictures ‘Judges With Gas Masks’ (pictured). ‘The usual service at the beginning of the new Law Term is held at Westminster Abbey,’ the Post informed readers. ‘But there are no wigs, no robes, no procession, no breakfast. And the judges carry their gas masks.’

October 1939 was in fact the last such service of the war. In 1940 bomb damage to the abbey meant the service was cancelled. It was not held again till 1946. Since then there has been one other disruption to the form that will be on show tomorrow. In 1953 the Queen bagged the abbey for her coronation on 2 June, and the judges had to use nearby St Margaret’s church as the coronation structures and decorations had still not been removed.