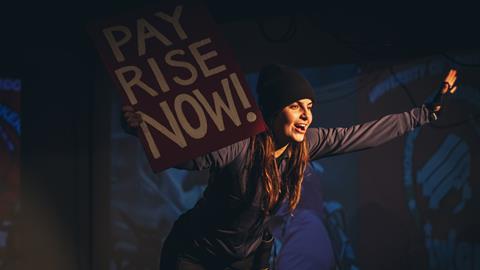 ‘The play’s the thing,’ as the Dane once had it. And so it is – at least in the policy and public affairs team at the Law Society. Former external affairs supremo Robert Khan, now at the General Medical Council, scored a hit three years ago with Brexit!, a comedic take on the gift that keeps on giving at Westminster. It was staged at the King’s Head Theatre, Islington. (Where else? Ed.)

Now it’s the turn of Chancery Lane policy adviser James Woolf. His play about the gig economy, Empty in Angel (Islington again? Ed.), garnered rave reviews on its debut pre-pandemic. It can still be enjoyed at selected venues, including the Bloomsbury Theatre. ‘ A bicycle courier, her community, and their amazing fight for rights in the gig economy. Their simple demands for fairness, dignity and security – ending in a historic legal battle,’ says the blurb.

‘Write what you know’, they say, and James has. For more information visit oldredliontheatre.co.uk.