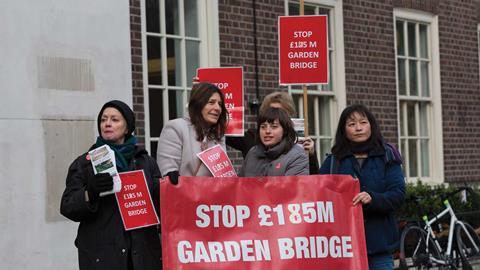 Bar’s verdant shortcut gets the chop

A bridge too far – waxing lyrical about garden crossing gives way to outcry over public money.

Dour northerners at Obiter Towers (and they are numerous) permitted themselves a smile today as London mayor Sadiq Khan scrapped the decadent folly that was to be the Thames Garden Bridge. Commuter trains in our great provincial cities are buses running on metal wheels: myriad uses can be made of the £70m of public money that will not now be squandered on the egos of assorted Chelsea luvvies and aesthetes.

Still, it’s not such good news for the very many eminent members of the bar who reside most agreeably in the more verdant parts of Surrey and Hampshire. And Obiter, perched in an eyrie just off Fleet Street, reckons the bucolic crossing between Temple and the South Bank would have lobbed about 10 minutes off the walk to Waterloo. Ah well. It’s more steps for the Fitbit, any road up lad, as apparently they say north of the M25.