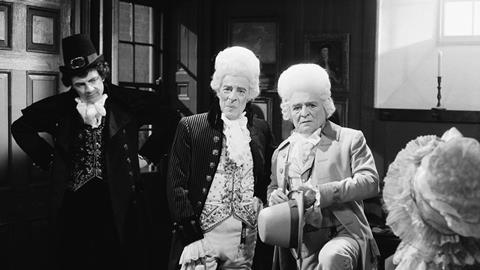 Curse of the Scottish play strikes

‘On no account mention the word Macbeth this evening,’ Blackadder tells Baldrick. ‘It brings the actors bad luck and makes them very unhappy.’

The curse of the Bard’s Scottish play appears to have struck again. Tuckers solicitor Judy Ramjeet was supposed to be treading the boards at Barons Court Fringe this week as Lady Macbeth, in an updated version directed by Julian Young, president of the West London Law Society.

Sadly, performances were cancelled when the country went into lockdown to slow the spread of Covid-19. Ramjeet hopes the play will return later this year at the same theatre.

The Royal Shakespeare Company says that to break the curse, you must exit the theatre, spin around three times, spit, curse and then knock on the theatre door to be allowed back in. Hugh Paddick and Kenneth Connor (pictured) expelled the hex rather differently of course: ‘Hot potato, orchestra stalls, Puck will make amends!’ (followed by a painful nose tweak).

Don’t ever let it be said you never read useful advice in the Gazette.