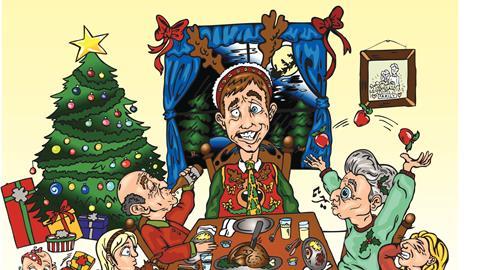 What is it with legal services marketing and the festive season? Over the years, we have got used to guff about ‘divorce day’, allegedly a date when couples strained by all that togetherness over Christmas and New Year queue up at the nearest family practice. This has now stretched to ‘divorce month’, according to one firm promoting the inclusion of ‘pet nuptial’ clauses in marriage agreements.

In this climate, we applaud the refreshing approach of Surrey firm Barlow Robbins, which sent a press release stating: ‘In reality, couples don’t wake up on 6 January 2020 and decide, simply because of a bad Christmas, that they will proceed with a divorce. From our experience, there is no significant upturn in enquiries; people decide to consult a lawyer for all sorts of different reasons throughout the year.’

But if divorce day is a myth, other seasonal perils may fill the gap. According to Stephensons Solicitors LLP, early January is peak season for disinheriting relatives after Christmas quarrels. The firm said fallout from ‘stressmas’ last year led to a 114% spike in enquiries in January 2019. This year the firm is braced for similar numbers.

Another novelty in our inbox was the dangers of hitting the gym to shed a few Christmas pounds: ‘New year, new you – lawyer outlines what to look out for to avoid injury at the gym.’ Advice included being aware of slippery surfaces. Be careful out there.