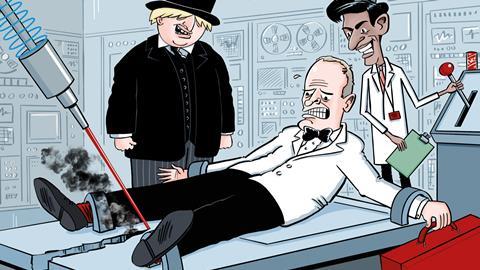 Dom Raab is back: as lord chancellor 008 in… GOLDFLINGER

In a blaze of incandescent glory, the sky over the Cretan sea lit up with the palette of sunset. From his private balcony in the exclusive Anaximander Boutique Resort, Dom Raab, special agent of Her Britannic Majesty’s Government, nodded his appreciation as the immaculately liveried steward prepared his chicken caesar and bacon baguette the way he approved – shaken, not stirred.

Life, he concluded, was good – especially with no one from Whitehall on his back.

But – as if on fated cue – the twin electronic devices in his tailored white mess jacket broke his reverie with an insistent buzzing. ‘Rept No10 soonest’ ordered the monochrome display of the Foreign Office-issued BlackCurrent. The folding colour screen of his personal Kimchi XL bore much the same message, albeit with more graphics and verbosity, opening with: ‘Raab – Where the hell are you? Don’t you watch the news?’

He recognised the unmistakable tones of ‘B’. That spelled trouble – but trouble was Raab’s middle name. ‘Servitoros,’ he called in fluent Greek, ‘Il logariasmos, por favor.’

Q, the outfitting expert, was his usual model of slightly irritable efficiency. In the secret workshop behind the backroom of Rede & Avenscroft, where generations of lords chancellor had been kitted out for secret missions, he deftly took measurements as Raab, fresh from his bruising briefing with B, pressed for details about the fate of his predecessors.

‘Buckland? Oh, you don’t want to know about that unpleasantness. The piranha tank… it was quick, but messy nonetheless.’

‘Gauke? We prefer not to talk about him. The word is that he’s… gone to the other side.’

‘Don’t even mention that name.’

‘Miss who?’ Raab groaned as Q squeezed him in to a cumbersome suit of gilded robes, and proffered a sinister-looking handful of black nylon mesh: ‘Now, this looks just like an ordinary pair of tights – but in the right hands, it can be lethal to the rule of law. Raab – where do you think you’re going with that?’

‘Thanks for your help, Q, but right now I have an appointment. With a Mr Goldflinger.’

‘Ah, Mr Raab, I’ve been expecting you.’ The enigmatic Goldflinger ushered Raab suavely into his underground lair at 1 Horse Guards Road. ‘Or should I call you 008? You see, I know all your secrets.’

‘All right, Goldflinger. So what can you tell me about that £477m you chucked in my direction in the spending review? What do you want in return?’

Raab became aware of a looming presence at his right shoulder. He turned, to see a burly individual in formal butler’s wear, but with strangely familiar features – and hairstyle, ‘Pfwa! Mishconduct! PerfectPeppapyramidpiffle!,’ the creature spluttered between foam-flecked lips.

‘My apologies,’ Goldflinger murmured, with a sinister edge to his voice. ‘I neglected to introduce you to Botched Jobb, who has lately taken up a position as my manservant. It would be diplomatic to ignore his speech impediment, lest he take offence. Now let us move on to the master plan, or Operation Grand Slam, as I like to call it. We will require your… cooperation in a number of matters.’

At that, a vice-like hand grasped Raab by the neck. The room swam, and then the floor hurtled up towards his face.

A foundry stench of white-hot plasma brought Raab to his senses. He jerked upright – to no avail, as his hands and legs were pinioned to a harsh flat surface. He craned his neck to observe a beam of pure quantum energy steadily slicing up the table, between the spread of his legs. From the corner of his eye he could see Botched Jobb, an idiot grin on his apelike countenance.

‘What – what’s all this?’ Raab exclaimed.

‘No need to panic, 008,’ came the far-from reassuring voice of Goldflinger. ‘We are about to make some changes around here and this little operation is just to ensure that you are on-side. We will shortly discuss human rights. But first, judicial review.’

‘Do you expect me to talk, Goldflinger?’

‘No Mr Raab, I expect you to di-rect a programme of constitutional reform which will zip expeditiously through parliament, win the acclaim of the popular press and set the project up nicely for re-election in 2023. At the regrettable cost, no doubt, of consternation in the legal profession and decades of constitutional messiness to come.’

Struggling against his manacles, Raab grimaced at the laser inched nearer and nearer. Surely, after all his adventures, this could not be…