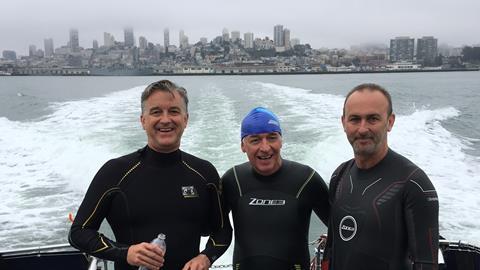 We do not often celebrate a solicitor’s escape from jail, but here is an exception. Jonathan Throp (pictured centre), a partner at Pearson Hards Solicitors in New Malden, Surrey, has survived the notorious two-kilometre swim from Alcatraz Island to San Francisco.

Throp says: ‘It is challenging partly due to the fearsome currents (did someone mention a flow rate of five million gallons per second?), the varied marine life that may take a fancy to us (surely there aren’t actually sharks?) and me being 57 when I really should know better.’

Clint Eastwood never made it, of course (or did he?).