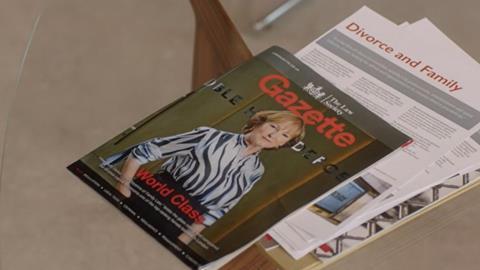 The Gazette can be found in law firms up and down the country – and now it has been spotted in a fictional firm too. In its acting debut, the Gazette has appeared as 'set dressing' in The Split, a TV drama series about the messy world of family law.

For readers not familiar with the BBC show, The Split follows a family of high-flying lawyers in London divorce specialist Noble Hale Defoe. The enviably glossy office is a hotbed of intrigue. One moment, colleagues are indulging in some brazen adultery between meetings – glass walls not a deterrent, it seems – the next, they are discussing their alcohol problems with clients and nipping out for a spot of lunchtime shoplifting. It is a wonder they get any work done at all.

That said, main character Hannah Stern does put in the overtime. In the course of a single episode, she races to St Pancras to retrieve a marriage certificate – thus saving her client from nasty French divorce proceedings – and attends a separate client’s book club to offer some impomptu legal advice. The next episode she is whipping up a non-molestation order in the toilets at her daughter’s parents’ evening. The time-sheets must be a nightmare.

The Gazette appears in episode five with a doctored front cover showing matriarch Ruth Defoe receiving an award from the 'Law Association'. Obiter hopes this is just the start of a glittering acting career.