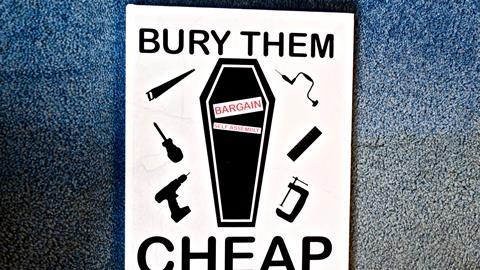 Most of your colleagues will have a side project or hobby to help them stay sane when they leave the office. Few will go home and make their own coffin. But Sheffield solicitor John Jones is one such person. And he has applied his considerable skills to advising others how to construct their own casket, to save their next of kin a little anxiety when the time comes.

Jones, 68, has had two goes at making his own coffin (the first now doubles as a bookcase) and the finished article sits in his garage.

He has now captured his knowledge in a book. Bury Them Cheap (Austin Macauley £18.99) is a detailed, step-by-step guide to funeral matters ranging from shrouds to the virtues of pine, and the practicalities of running a DIY funeral.

A former crafts teacher, Jones rejects the idea his pursuit might be macabre, saying he is making life easier for his family. And death easier, too.