Having your square roots done

The Fields Medal, dubbed the ‘Nobel’ of mathematics, is only awarded every four years. With the next Fields not due till 2022, Obiter wondered what people who are ‘good with numbers’ are doing to keep themselves sharp in the intervening stretch. 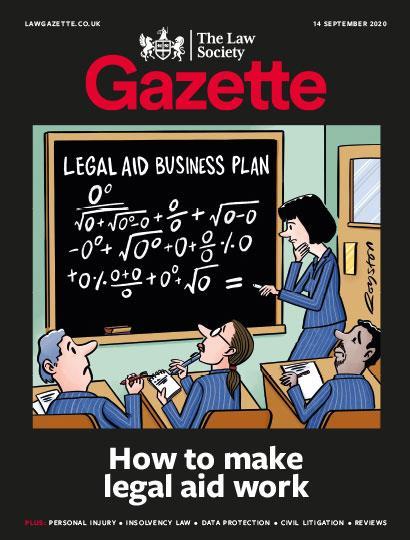 The answer: they are reading the Gazette. The cover illustration for ‘How to make legal aid work’ (14 September) had an equation, entirely composed of zeros, from which the answer was left blank. Cue a lively discussion on the Law Society’s staff Yammer page among two of Obiter’s more numerate colleagues.

Clever Person A: Anyone else up for the maths challenge on the latest Gazette cover?

Clever Person B: 0/0 = undefined… and that transcends across all variables and is therefore the right answer.

Clever Person A: 0/0 = infinity but has to be modelled as undefined electronically… but it is still the same result, which doubly makes the cartoon appropriate.

Clever Person B: That was my first thought but apparently only a non-zero numerator divided by 0 yields infinity. Ergo 0/0 is considered undefined.

Obiter wanted to know how ‘A’ and ‘B’ did, so contacted the cartoonist Royston, author of the equation. ‘I’m amazed to find out that it somehow stands up,’ he replied, ‘because I am not in the least bit mathematically minded… I did a Google image search for maths problems. I took elements from various equations, replacing all numbers and letters with zero. I threw in lots of square root symbols simply because they look good visually.’

Still, in improvising thus Royston has wandered into an area where passions run hot. As another colleague adds: ‘If anyone wants to challenge Euclid’s proof of the infinity of prime numbers I’ll see them outside.’