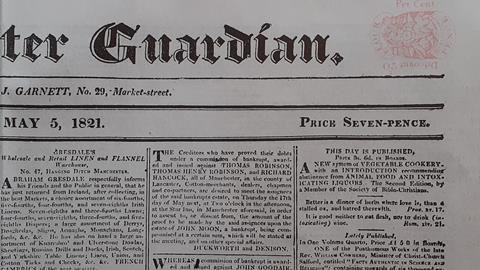 High treason and bankruptcy – all for seven (old) pence

Online readers of the Guardian are regularly urged to contribute to its upkeep with a voluntary contribution. But how much to give? Obiter suggests ‘seven-pence’ – price of the first Manchester Guardian, published 200 years ago today. The paper has thoughtfully included a replica in today’s print edition.

But before Gazette readers go fishing in the change pot, they will of course want to make sure there was some legal content that day.

Luckily, 5 May 1821 was one day in an age of political upheaval and growing pressure for political reform. At the salubrious end of things is the report on Lord John Russell’s motion ‘for giving Elective Franchise to the towns’. It was rougher, though, for reform supporters who were not Whig grandees. Lord A Hamilton, the Manchester Guardian relates, took up the cause of ‘Mr James Turner of Glasgow, who had been arrested on a charge of high treason, and had never been brought to trial’. Following a ‘riot’ Turner had been imprisoned the previous year after officers arrived at his ‘house with a warrant to search for papers and arms’. Another petition was on behalf of a child prisoner in Ilchester Gaol.

Away from parliament, we gain an insight into entrapment tactics used by police in law enforcement – here to catch ‘Alexander Payne and John Hill’, accused of ‘extensive forgery’ of currency as witnessed by two undercover operatives.

There is a list of bankrupts giving for each their name, street and occupation. On the less immediately exciting law reform front, a brief sentence notes that the Irish Courts of Law Bill was in the Lords – which Obiter, off a little light research, believes became the Common Law Procedure (Ireland) Act 1821. The act was, in its own words: ‘An Act to regulate the Proceedings in the Civil Side of the Court of King’s Bench, and also in the Court of Common Pleas, and in the Pleas or Common Law Side of the Court of Exchequer in Ireland.’

Readers will make their own judgement as to whether the £2.13 uplift from seven-pence for today’s print Guardian is value for money. Interesting to note that 200 years on, police surveillance, arguments over constitutional reform, and trouble in Ireland all still feature, though the daily list of bankrupts has been axed.