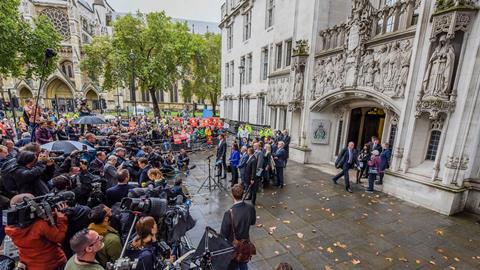 Highbrow clash of the heavyweights

A spat has erupted in the London Review of Books, an ordinarily genteel magazine for highbrow types keen to expand their (already voluminous) vocabularies.

Country solicitor Mears, older readers may recall, does not shrink from confrontation. In the mid-1990s, he cut a swath through the Chancery Lane establishment on a populist ticket that won him feisty interviews in national newspapers. Suffice to say he was never renowned for political correctness.

The object of Mears’ ire this time is an article by Sir Stephen defending the Supreme Court as a bulwark of the constitutional principle ‘that nobody, not even the Crown’s ministers, is above the law’.

Piffle, says Mears, responding in the LRB’s letters pages. The court’s decision was political: ‘Does one anyone really think the justices, in their personal capacities, were not in sympathy with the objective of [reversing the 2016 Brexit referendum result]?’

Oof. It was never going to end there. Last week, Sedley reached for the magisterial putdown by accusing Mears of demonstrating ‘the depth to which public discourse has sunk’.

Can’t wait for the next issue.