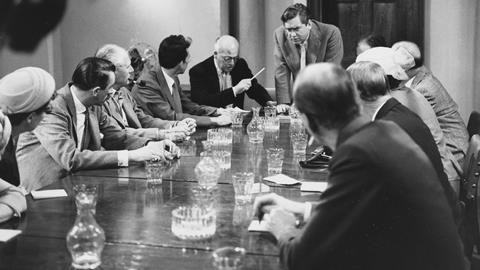 Back before the summer break, Obiter enquired whether there was any truth in the anecdote about Lord Dyson, while sitting as a Court of Appeal judge, being called to jury service at the old Middlesex Guildhall Crown Court. The story is now confirmed – and our source is none other than the former master of the rolls himself.

In his much talked-about autobiography A Judge’s Journey, Lord Dyson reveals that he was the first judge to be summoned after the change of rules in 2004. On arriving in court, he was shown ‘an excellent video’ of what happens in a trial. ‘Naturally, I did not divulge that I had in fact presided over a considerable number of such trials.’

After that, not much happened for a while. As with most jurors, his lordship’s lasting recollection is that ‘much time was spent waiting and doing nothing in fairly uncomfortable surroundings’.

However he did get to try one case, that of a man charged with assault after a fracas on a train. As foreman, he delivered a not guilty verdict. ‘In hindsight I should probably have held out for a conviction and insisted on the jury bringing in a majority verdict. But we were not trying a grave charge and there seemed to be little point.’

Full of hope for a more interesting case, his lordship presented himself before Judge Fabyan Evans, with whom he had sat in the past on appeals. Alas, the judge told him to stand down: ‘This man is well known to me.’

‘As I walked disconsolately away, the woman who was standing next to me in the group of would-be jurors asked: “What you done, then?”’