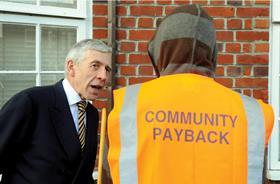 From this week offenders carrying out community sentences must wear high-visibility jackets branded with the ‘community payback’ logo. Justice secretary Jack Straw said, ‘The taxpayer has an absolute right to know what unpaid work is being done to pay back for the wrongs the offender has committed’. Shami Chakrabarti, director of Liberty, said: ‘We hope that no one is harmed as a result of this medieval justice.’

The April 1999 start date for the new civil justice procedure is ‘too soon’ and has caused ‘something approaching panic stations’ in some quarters, Sir Richard Scott, the vice chancellor and head of civil justice, claimed last week.

Two years of research into the provision of legal advice in police stations culminated last week in the publication of a highly damning report showing solicitors and police in a very unfavourable light. Solicitors are accused of delay in responding to calls for advice, of making indiscriminate use of representatives and of relying heavily on telephone advice.

The report of the Committee on Data Protection, published last week, stemmed from the white paper Computers and Privacy which the present government presented to parliament at the end of 1975. This proposed a scheme of safeguards for individual privacy in respect of computerised personal data in the hands of both government departments and private organisations and individuals.