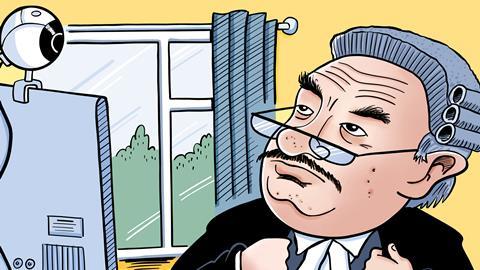 Obiter presents: Rumpole of the Webcam

(With apologies to the late Sir John Mortimer CBE QC)

Old age hath yet his honour and his toil. So, against fearful odds – including my colleagues in chambers – I, Horace Rumpole, barrister at law, husband to Hilda (She Who Must be Obeyed) and father to Professor Nicholas Rumpole (the brains of the family), remain open for instructions as we approach the century’s third decade.

True, the circumstances of my practice (of which more anon) have changed. The days are long gone when reasonably remunerated legal aid briefs labelled ‘Rumpole’ would pack my clerk’s mantlepiece. The younger Rumpole of the Penge Bungalow Murders would scarcely recognise the Old Bailey and its purlieus today, especially since a so-called lord chancellor took an insouciant chainsaw to the golden thread of our constitution with the Legal Services Act.

While the cloud-capped towers and gorgeous palaces are not what they were, some racks are left behind. Take 3 Equity Court, now presided over by Phyllida Trant QC following the departure of Guthrie Feathersone for central Asia, where he adjudicates tax-free on the bench of the Kaosistan International Court of Commerce.

I had got into the habit of dropping into chambers at times when colleagues were most likely to be engaged in paying work. Generally between the hours of 1030 and 1230, when the Rolls Building and Supreme Court are in session (courts are like public schools: the more you pay, the shorter the hours they sit). But once in a while I was caught out; on this occasion by Phyllida, always the Portia of the chambers.

‘Ah Rumpole,’ she trumpeted as I tried to slip away unnoticed. ‘I don’t think you’ve met Zayn, our new Change Challenge Champion?’ She indicated an individual of indeterminate sex, dressed apparently as a crashed hang-glider. ‘Change Challenge Champion?’ I queried, mainly to drown out the sound of sheeted dead rotating in the crypt of Temple Church.

‘So-oo cool to meet you, Horatio,’ the Zayn creature enthused, embracing me while handing over a pile of flyers which, on inspection, turned out to be enrolments for workshops on diversity, team building with some people called Myers and Briggs, agile working and client care – this latter apparently necessitated by the chambers’ embrace of direct access. This involves dispensing of the services of excellent solicitors like ‘Shady’ Nook – last heard of drumming up an opt-out group action against a well-known rucksack brand on behalf of anyone done injury by their cursed backpacks in pubs and tube trains – in favour of soliciting our own clients through small ads in the back of a topical fortnightly.

Little did they realise that, so far as agility and direct access are concerned, I was already, ahem, pushing the envelope.

‘Rumpole! Are you talking to yourself again?’ The voice was that of She Who Must Be Obeyed, returning to 25B Froxbury Court, laden with the fruits of her early morning expedition to the mini-marts of Gloucester Road in search of dishwasher salt, Vim, and other homely fripperies.

‘Quiet, Hilda, I am in court,’ I retorted a trifle testily, with an instinctive bow towards the camera installed by my granddaughter Joni on the Rumpole PC. ‘In court’ was stretching the point a little – I had arisen at an ungodly hour to represent by video image my client Jezza Timson, youngest member of a south London clan whose brushes with the law had kept me in paying work for decades.

The baby of the family was in the Feltham home for young offenders awaiting trial for joint enterprise, denied bail on the unwarranted suspicion that witnesses might be inclined to change their story were Jezza Timson at liberty to roam the dance halls and fried chicken takeaways of London SE18.

Until Hilda’s intervention the old darling of a stipe (‘district judge’, sounds like the adjudicator at the autumn fayre) had been lapping up my arguments, no doubt impressed by my rig of wig, bands and robes. Nonetheless, we ended with an impasse; the usual adjournment for ‘reports’.

Logging off, the old darling remarked I need not robe up for such occasions. However she had one last point of order: ‘Mr Rumpole, I have to ask – where did you buy your underpants? They’re just what I had in mind as my contribution to the HMCTS Secret Santa.’

What with one thing and another, including a murmured excuse to She about parking my robes back at chambers, I ended up in Pommeroys Wine Bar, with colleagues joining me in a bottle or twain (Zayn insisting on a brew called a Stormy Monday). I was entertaining the company with a favourite anecdote about His Late Honour Mr Justice Bullingham when a polite pair of Oriental tourists asked if I were indeed a genuine English attorney, and if that was the case, would I object to having a photograph taken with them?

A succession of such requests followed, accompanied by a drink and an anecdote or two, until a comely lady bearing a flag advertising ‘London Legal Tours’ approached me with a proposition.

Which is why you will nowadays find Rumpole embracing the brave new worlds of agility, diversity and direct access from a vibrant workspace, my favourite corner table in Pommeroys. A living exhibit in the museum known as Legal London, deployed for representation via laptop and webcam, but, more lucratively, for photo opportunities with students and retired practitioners from half the world’s jurisdictions.

Look me up, some time, as I dole unequal laws unto a savage race over a glass of Chateau Fleet Street. Made weak by time and fate, but strong in will. To strive, to seek, to find, and not to yield.