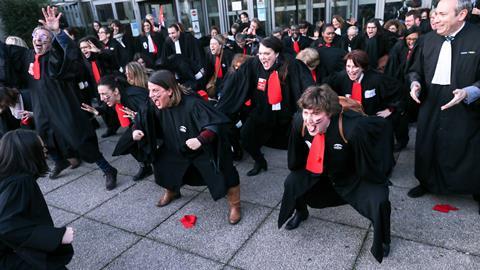 Rhythm is a dancer for protesting lawyers in France

Legal aid lawyers in England and Wales aren't shy when it comes to letting the government know what they think about its justice reforms. Rallies outside parliament with protesters holding aloft an impressive puppet of Chris Grayling, candlelight vigils outside the Ministry of Justice's headquarters, and images of court closures projected onto the site of the former Bloomsbury County Court for drivers heading up and down Marylebone Road to see. And let's not forget the times when lawyers have refused to take on cases under slashed fees, bringing the courts to a near-standstill.

However, campaigners may wish to change tactics next time, inspired by colleagues across the pond protesting against president Emmanuel Macron's pension reforms. First, some threw their official court robes at the feet of the justice minister during a press conference. The protest stepped up a gear when lawyers from Rouen danced outside their courthouse.

Lawyers from Rouen dance outside the courthouse in protest against the governments pension reform #GreveGenerale#Greve22janvier#France#Macron#reformedesretraites
pic.twitter.com/V6uyjZJIFR

Just when you think you've seen it all, lawyers in Bobigny, in the northeastern suburbs of Paris, perform the Haka.

Lawyers in #Belloubet perform a Maori Haka War Dance to protest Macron's pension cuts and the disintegration of the legal system.