A bleak set of local election results for Jeremy Corbyn’s Labour party was relieved by a council victory in Norwich. Solicitor David Rowntree tweeted today: ’I’m delighted and humbled to have been elected county councillor for University Ward, Norwich.’ Criminal defender Rowntree, currently listed as non-practising, qualified in 2012 after doing his training contract at Kingsley Napley. 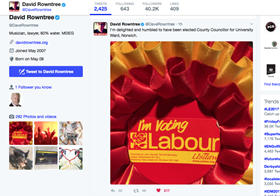 Obiter knows him as a stalwart campaigner on legal aid issues, but his other claim to fame is his time as drummer with the 1990s Britpop icons Blur. ’I try to play to my strengths,’ he told the Gazette a little while back. ’But I know things don’t often turn out how you expect so I try to keep an open mind.’ Perhaps a career in parliament beckons?