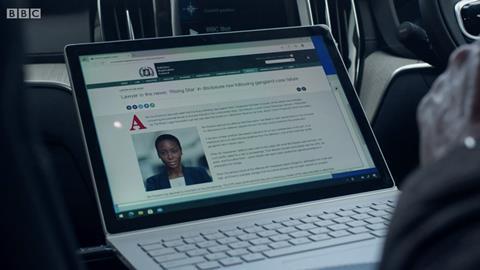 Showtrial lawyers get BBC off the hook for now

The words ‘BBC flagship legal drama’ are normally enough to send lawyers running for the remote, but they would have been well advised to stick with Showtrial, which debuted on Sunday night and runs for the next four weeks.

In contrast with fellow Sunday drama Line of Duty, there were no sleeping duty solicitors or (so far) lawyers in thrall to mobs or drugs gangs. Which is a start already.

Tracy Ifeachor deftly plays the duty solicitor Cleo Roberts who is required to represent errant rich student Talitha (played by Celine Buckens), who has sent a series of abusive and threatening texts to another girl who happens to have gone missing. The contract between the lawyer, holed up in a mundane first floor office, and the client, daughter of a benighted property developer, makes for some gripping scenes between the two. Obiter particularly enjoyed when Roberts offers to step aside from the case, prompting Talitha to respond: ‘You are still my solicitor – even if you are on legal aid.’

We’ll forgive Roberts sharing details of her client’s case with a colleague in a busy (and probably too plush) wine bar, given the need to move the plot along. The stand-up row in the police cell was also a little unprofessional, but in fairness Talitha is really annoying. There is also the potential for a little stereotyping to come, with Talitha’s father’s lawyer briefly introduced in the first episode and already seeming to be a shady character.

Obiter was temporarily thrilled – and a little surprised – to see the Gazette itself appear briefly, as a webpage was shown with Roberts having been interviewed as ‘Lawyer in the news’ in a font and style remarkably similar to our own. On closer inspection, the rogue publication is published by something called the British Legal Association. No doubt a proud moment for Robert to be featured in print, but who knows: if things go well for Talitha, maybe she’ll make it onto our pages one day?