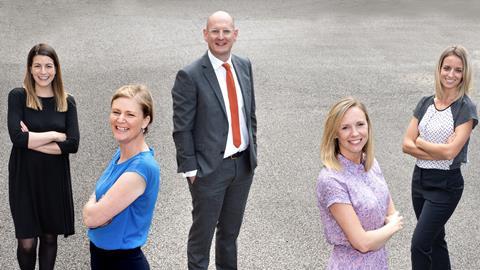 There is a set formula for publicity shots accompanying press releases about law firms’ new recruits.

Many times the participants stand in a line and usually ranging from shortest to tallest. Occasionally, if the photographer is feeling bold, they may pose with hands on the next person’s shoulders like they’re dancing to the Locomotion. A variation on that theme is where some people will perch on those weird chairs from reception while others stand next to them.

Other times, the people in the picture may face each other at a slight angle, looking like inverted flippers on a pinball machine. There might be the obligatory handshake pose, or even – very rarely – a picture looking up at a team huddle as everyone places their hands like they’re about to break off and start a dodgeball match or something.

Basically, these are awkward and involve people standing uncomfortably close to each other. The grimaces tell you everything. Which is why, in a very small way, the social distancing rules we currently abide by are so welcome.

Now publicity shots arrive on our desk looking different every time. Take York firm Torque Law, which sent a press release about its expansion across last week with everyone facing slightly different directions, each at least two metres apart. It looks less like a corporate photoshoot and more like an album cover (albeit where the band are dressed in work gear). Obiter for one is all in favour.