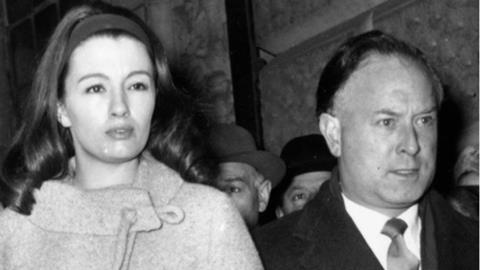 With everyone glued to The Trial of Christine Keeler, the BBC Television drama about the Profumo affair, it is appropriate to point out that one of the good guys was a solicitor.

Freddie Baldwin, a rising star on the London scene, instructed Jeremy Hutchinson QC to defend Keeler on a perjury charge. His son, journalist Frank Baldwin, tells Obiter: ‘The story goes that dad and Jeremy persuaded Christine to plead guilty to the charge of obstruction of justice and perjury following her false allegations of assault by Lucky Gordon.

‘I am also told that Sir Anthony Hawke, the recorder of London, said to Jeremy and Freddie after the Old Bailey trial that it was their efforts to get Christine to admit to the crime and the QC’s summing up that persuaded him to give her the much shorter sentence of nine months, of which she only served four and a half months.’

Baldwin went on to act in several high-profile cases including the theft of the World Cup (famously found by Pickles the dog) in 1966. He achieved his ambition to be appointed to the bench, but was struck down prematurely by two major strokes.

Happily his firm, Baldwin & Co, remains very much in business, and still serving the people of Bermondsey in the hands of the founder’s son Christopher.