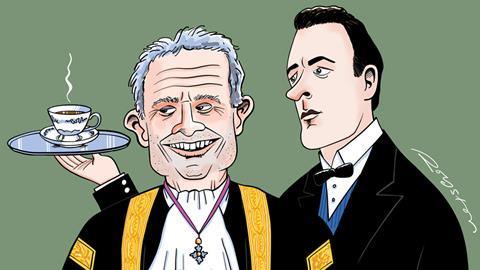 It’s a rummy thing about my man Raab, but he always knows just when to pop up. Whether it’s with a life-saving cup of tea or to declaim the correct legal obiter dicta – if that’s the phrase I’m after – in the House of Commons.

Take the imbroglio of my Aunt Theresa, Biffy Grayling and the chaps in black brocade robes in that Gothic building over Parliament Square…

But hang on a tick – I’m getting ahead of myself. I don’t think I’ve told you how Raab and I first crossed paths? Pull up a pew, light a gasper if you must, and enlightenment shall be forthcoming.

It all started one sunny morning shortly after Cheesy Truss had been given the heave-ho and I was wheeled round to a funny little shop in Chancery Lane to be measured up for wig and tights. I managed to dodge the wig, but ended up with a rather sporting lace neckerchief to offset the black and gold robes, which, from the dead newt I found in the pocket, I deduced had last been worn by Gussie Gove.

You remember Gussie? Intellectual type, face like a startled haddock, brain prone to short-circuiting when the frontal lobes overheat. Anyway, he’d been dispatched to the country to take a rest, which is why the robes had been handed down when my good and worthy Aunt Theresa – not to be confused with Aunt Amber, who drinks battery acid and bays at the full moon – waved the merciful P45 at Cheesy.

Anyway, thus rigged out, I hot-footed it down to the Royal Courts of Justice where a stout yeoman with a mace ushered me through the back door to meet the great and the good.

I don’t know if you’ve ever been sworn in as lord chancellor, but, when you are, take my advice: do the business in the chillier months.

What with the June heatwave, the robes, and the fact that the central heating was going full blast for the benefit of the older judiciary, I was gasping like the last survivor of Fort Zinderneuf. Fortunately, a tiny but saintly female named Brenda wheeled in a trolley clinking with the vital ingredients.

Naturally I had two or three snifters straight off – who wouldn’t, after all those speeches – and pretty soon I was sharing a bottle of very passable Madeira with a couple of elderly gents in full horse-hair who seemed keen to elicit my views about the scalier end of the daily press.

As I have some experience with Grub Street, I was happy to fill them in. I won’t say many bread rolls were thrown – these judicial types are pretty stuffy when it comes to decorum – but we seemed to hit it off. It was a decidedly jaunty Lidington LC who weaved back to Petty France in the small hours to catch a snooze on a chaise longue which, judging by the whiff of cigars, dated from Tubby Clarke’s tenure.

Which is where I surfaced, a fleeting couple of hours later, dimly aware that a person unknown had opened the curtains and was moving soundlessly about the outer office.

‘W’timeisit?’ I groaned, as one does on these occasions.

‘A quarter past seven, lord chancellor, and here is your tea.’ Sure enough the reviving infusion was proffered and soon the mists cleared to reveal a dark-suited young chap looking much too alert for the hour. Even then I noted the bulging forehead and gleaming eyes of a fellow who eats a lot of fish.

‘I beg your pardon, lord chancellor, but I did not introduce myself. My name is Raab. I was sent by Number Ten with instructions to attend you in the capacity of minister of state, as it is thought some legal knowledge might be required to steer the Brexit legislative programme through the lower house.’

‘What Ho, Raab,’ I countered, and, just to show him I was awake, threw him a line I’d picked up in Pol. Soc. at the Habs. ‘Parliament thus defined has, under the English Constitution, the right to make or unmake any law whatever, what?’

‘You know your Dicey, lord chancellor.’

‘Oh, am I? Well don’t bally shout about it. Hey ho, I suppose we’d better get down to some work.’

I glanced at the top briefing paper on the pile. It was headed: ‘LSB-SRA-BSB: a stakeholder-dynamic IGR framework incorporating the OLC paradigm.’

‘Raab!,’ I croaked. ‘I’m going to need something stronger than tea!’