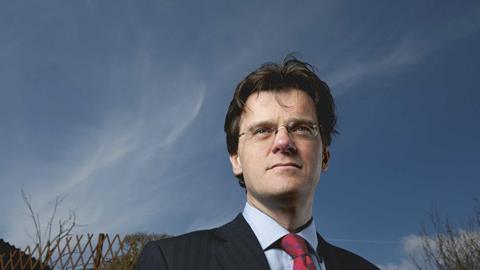 Rupert Scrase, the chair-elect of the Sole Practitioners Group, tells Jonathan Rayner why he has confidence in the sector

Rupert Scrase, chair-elect of the body that represents the 4,800 sole practitioners (SPs) in England and Wales, is surprised that more lawyers have not set up on their own. ‘But then there’s no hiding behind telephone switchboards for SPs,’ he says. ‘Clients know you are there. Maybe that’s what’s putting people off from taking the plunge.’

Scrase, who is set to become chair of the Sole Practitioners Group (SPG) at its annual general meeting in June, assumes office at a time when, in his own words, the threat of alternative business structures is a ‘done deal’ and all that remains is to work within the new legal landscape. He appears quite sanguine about taking the helm of a complex organisation, with a diverse membership ranging from one-person bands to ‘own account’ practitioners with perhaps dozens of staff, of whom none are partners.

He says: ‘We have a tremendous amount in common. It’s not the work we do – we are mostly specialists in a certain field of law. Our common ground is the regulatory regime under which we work. We all have to obey the Code of Conduct and we all have to comply with Solicitor Regulation Authority rules. And, of course, we are all SPs.’

Scrase inherited an organisation that earlier this year declined the Law Society’s invitation to join its new Small Firms Division, preferring to remain an independent stakeholder with no official status at Chancery Lane. An immediate consequence is that the SPG will no longer receive funding from the Law Society (last year was worth £24,000) but will retain its own magazine, annual conference and website.

Another notable departure this year is that, for the first time, the SPG is holding its annual conference overseas – Paris in the spring, on 10-12 May. Scrase says: ‘It’s proof, if proof is needed, that now is a good time to be an SP – there is confidence in the sector.’ Michael Mansfield QC will be a guest speaker, there will be learned addresses on civil litigation reform and the Solicitors Accounts Rules, and delegates are invited to cruise the Seine by night.

So there we have it – ‘le gai Paris’ and an upbeat mood of optimism, but what exactly does the SPG do? Scrase explains that in addition to a national executive committee with representatives from all regions of England and Wales, the SPG has local groups that organise their own events and provide support at a grassroots level. He says that the SPG provides training to members and, since 1996, has published a magazine, Solo. There are also two sub-committees, one of which is concerned with professional regulation, specialist accreditation, practice management, conveyancing, legal aid and other practice areas.

The other concerns itself with the annual conference, communication with members, pastoral care and indemnity insurance. All of which Scrase seems supremely confident he can take in his stride. But are there no problems in the SP universe to confront? ‘Regulation,’ he replies, ‘is a challenge that is still very much in my sights, in particular the SRA requirement to nominate compliance officers for legal practice (COLPs) and compliance officers for finance and administration (COFAs). Ensuring compliance with SRA rules is absolutely critical – because failure to do so could put you out of business. Nonetheless, these new COLP and COFA requirements have imposed a huge additional burden on SPs, who don’t have the resources simply to nominate a colleague.’

Other pressing challenges include surviving and prospering after the Jackson fee reforms and the Legal Aid, Sentencing and Punishment of Offenders Act (LASPO), which slashed legal aid across most areas of civil law. Scrase says: ‘SPs cannot hope to be treated as a special case. If they are practising in areas of work affected by Jackson or LASPO, then they will face the same struggles as lawyers working in partnerships.

‘The big difference is that SPs are closer to the ground and have developed a heightened sense of what is coming. Many merged with bigger firms back in 2009, for instance, when the indemnity market was particularly tough. They are also leaner, more agile and can adapt to change faster.’ Scrase’s attitude is consistently bullish. ‘I’m not blind to the fact that some SPs are struggling, but that’s the situation across the whole legal sector,’ he says. ‘That’s the reality and we have to live with it.’

Scrase has not always been an SP. After qualifying in 1997, he worked in private practice in Bristol before going in-house at the Engineering Employers Federation in 2001. Seven years later he set up as an SP specialising in employment law for employers. ‘It was my choice,’ he insists. ‘I hadn’t been made redundant or sacked. I wanted to work on my own.’ How difficult was it to go from employment to self-employment? ‘I’d made contacts through networking, but there is more to it than that,’ he says. ‘Many lawyers don’t know how good they are or how highly clients rate them. Clients often go to a certain firm for legal services because of particular individuals who work there. It’s really a case of letting people know that you’re now out there on your own.’

He concedes that as an SP one has to do one’s own marketing, accounting and general administration. ‘But at least you escape the management issues and politics that you spend energy and time on in larger firms,’ Scrase says. ‘It frees up more of your time for one-to-one advice. You have a much more direct relationship with clients when you are an SP. And isn’t that what most of us entered the profession for?’

Does he have other tips on how to make it as an SP? ‘Specialisation,’ Scrase answers. ‘I have come across SPs who specialise in data protection, heavy goods haulage, admiralty law, family and, like myself, employment law. There are SPs in every type of specialisation. The days of the high street general practitioner are over.’ So we are agreed that being an SP is an attractive proposition, but how could the government make life more comfortable for them? ‘Abolish or reduce employers’ national insurance contributions,’ comes the prompt reply. ‘These are a real disincentive for very small firms thinking of taking on more staff. Most simply cannot afford to recruit.’

Scrase, whose firm Scrase Employment Solicitors is in Bristol, employs a legal executive and a student who is completing the Legal Practice Course exams. Is Scrase offering the latter a training contract? ‘That’s impractical unless you collaborate with another SP,’ he replies. ‘I just don’t have enough seats to offer trainees, but if they can move on from my employment law seat after six months to another SP’s family law seat for six months and so on, it could work.’

Does he have any final words of advice or caution for prospective or current SPs? Scrase says that a major issue all SPs must plan for comes not so much at the start of their SP career, but at the end of it: run-off insurance cover. He says: ‘You must plan for run-off because otherwise, 20 or 30 years down the line, you may find yourself with a practice that you cannot sell but must continue to insure to protect clients, even long after you have retired. The alternative is not being able to afford to retire, of course, and I have heard plenty of anecdotal evidence of that.

‘If you can sell your practice, it becomes a successor practice and the problem goes away. Otherwise seek advice and make plans for run-off as early as possible.’

And what can SPG members expect from his forthcoming year in office? He says: ‘I am going to try to make the SPG more relevant to SPs on the ground. I want to build on established local groups and encourage people to get together to create more of them. I want us to assist with know-how, issues of regulation and how to run your own firm. And I want to remind SPs that very few clients are swayed by the size of the firm you work in. What’s important to clients is the individual lawyer and the quality of one-to-one advice that he or she gives. SPs should focus on providing precisely that.’

So to continue the theme of Paris in the spring, it’s a case of vive les SPs and not a hint of les miserables.

Jonathan Rayner is a reporter on the Gazette