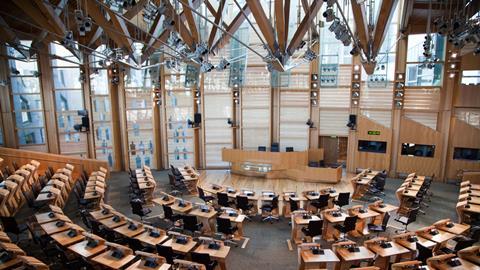 ABSs in Scotland – rarer than Nessie

The Westminster government’s zeal for new business models in the law does not appear to be replicated at Holyrood.

As ministers consult on further liberalisation in England and Wales, the long wait for alternative business structures in Scotland will soon enter its seventh year.

The Scottish Parliament (pictured) approved the introduction of ABSs - an issue which had bitterly divided Scotland’s 11,000 solicitors -  as long ago as October 2010. North of the border, however, a tight rein was kept on what was (and still is) envisaged. Under the Legal Services (Scotland) Bill, ABSs in Scotland would be majority-owned by solicitors and/or other regulated professionals, such as accountants or surveyors.

They would be known as ‘licensed legal services providers’.

Fergus Ewing, then minister for community safety in a minority SNP administration, declared that the legislation presented ‘greater opportunities for firms of all sizes to be more competitive and deliver clear benefits for the legal profession and consumers’.

Since 2010 the tectonic plates of Scottish politics have not so much shifted as convulsed. The same could be said of the solicitor profession, with a succession of Scotland’s most venerable legal firms swallowed up through merger with larger English firms.

But on this particular matter, movement has been glacial.

Four years ago the Law Society of Scotland reported an upsurge in interest in law firms north of the border becoming ‘licensed providers’, but warned that new regulations enabling them to convert remained ‘some way off’.

So it has proved. The issue, then as now, was the regulatory framework, encompassing matters such as spent convictions, rules relating to investors and limited partnerships. The Law Society submitted a proposed draft outline in 2012, but this has since gone through a number of iterations.

The Society’s website discloses that in early 2014 a revised draft scheme for licensed legal services providers was submitted to the government following further revision. That bounced back once again, until 18 months later - in December last year - the Society’s submitted another revised draft. This ‘followed further amendments made in light of comments from the government and other stakeholders’.

What those amendments are is unclear. The Society told the Gazette the December draft is not available.

It gets still more involved. A government consultation on the Licensed Providers Regulatory Regime - consumer watchdogs responded to it in May this year - is now closed. The Scottish government was initially unable to supply any further information and there is nothing posted on its website - but it did issue a statement to the Gazette later, making it clear there is still no timescale.

A spokesperson said: 'The Law Society of Scotland has applied to Scottish Ministers for approval as an approved regulator in terms of the Legal Services (Scotland) Act 2010 so that it may license entities seeking to be licensed providers of legal services.

'Before Scottish Ministers can approve, they must consult those who have relevant interests in the Law Society’s Regulatory Scheme, and the Lord President. The targeted consultation ended in May and responses analysed. Timescales for the approval and authorisation process are being considered.'

Of course, with Scotland’s profession ticking over nicely, stakeholders in government and the profession could be forgiven for not being greatly exercised about liberalising legal services.

Brian Inkster, of Scottish legal firm Inksters, is one interested observer. He is a member of The ABS & NewLaw Advisory Council, a cross-jurisdictional body representing ABSs and other new-style legal practices set up in 2014 by the Managing Partners Forum.

Inkster told the Gazette he is due to update the council on progress of ABSs in Scotland at its next meeting in September.

He said: ‘The last I heard a few months ago was that something might happen before the year’s out,’ he said. ’It’s extraordinary, given the passage of time since this happened in England and Wales, that it has not happened here in Scotland. But perhaps people have forgotten about ABSs and are getting on quite well without them.’